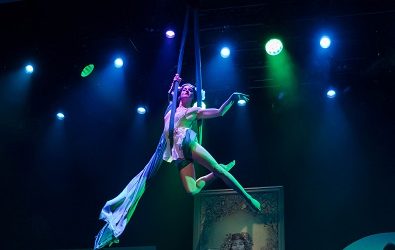 Mark Siano and Opal Peachy’s latest collaboration, Bohemia, is a viridescent cabaret about music, dance, absinthe and sex that took viewers on a trip through 1890s Prague on Thursday night at the Triple Door.

The story itself is relatively straight-forward, Czech composer Antonin Dvorák (Siano) develops a case of composer’s block before embarking on his all-important ninth sympathy.  After reading an unflattering review which claims he will never live up to the Bohemian legacy of Chopin, he looks for inspiration at the bottom of a bottle-of absinthe, which seems like some questionable decision making of a very bohemian sort- and is visited by the “green fairies,” a brash and sensual collection of dancers dressed in glitter and scarves, and the ghost of Chopin himself (Peachy).The odd group go on a series of hallucinations together in an attempt to get Dvorák his mojo back.

In reality, Bohemia is hard to describe, it flits from genre to genre enthusiastically, if not seamlessly-burlesque, cabaret, musical theatre, standard theatre, and fourth-wall-breaking stand-up to name a few. “What is going on?” Dvorák yells at one point about halfway through the performance, and there were times where I shared his sentiment. Sensual acrobatics were followed by bawdy sex-jokes, while side characters were frequently  introduced with little to no function other than vague thematic development. However, good theatre isn’t necessarily what one needs out of a cabaret dinner show, and it would be impossible to argue that Bohemia isn’t entertaining.

The gravity-defying acrobatics were truly fantastic, the few times the show dipped into full on burlesque were tasteful and incredibly well-done. Enough of the bawdy jokes landed to forgive those that didn’t, and the dance numbers were just plain fun. While classical may seem to be a niche market in 2019, the music was truly top-notch and enjoyable even for the most nascent of classical connoisseurs. I was only vaguely familiar with Chopin before the performance, and had never heard of  Dvorák , but I left with the urge to add both to my playlist.

Bohemia runs through January 26th, with both 17+ and 21+ shows each night. If you want to have a fun night out, enjoy some culinary satisfaction, and maybe drink some absinthe, tickets are on sale now.