First-year Communications majors are told one thing the first day of class. “Know your audience.” These three words are the wellspring of success or failure, depending on the student’s success at identifying the said audience. Tacoma Musical Playhouse in general, and Managing Artistic Director Jon Douglas Rake, in particular, knows his audience and what shows they will buy most enthusiastically. Irving Berlin’s “White Christmas” is all that and a snowman for the folks who support and patronize TMP. The feel-good piece opened to sellout crowds this weekend, and tickets are hard to come by for the rest of the run. Classics are that for a reason, and TMP stages a classic more often and as well as anyone else in the area.

The plot of the original “White Christmas” movie is slight and mostly beside the point, as it was set up as a skeleton on which to hang the talents of Bing Crosby, Danny Kaye, Rosemary Clooney, and Vera-Ellen. A song-and-dance team saves the day for a retired general while falling in love with pretty girls. That’s pretty much the size of it, with one misunderstanding and some corny jokes and songs thrown in. It worked in 1954, and it works today.

As far as local talent amongst song-and-dance men is concerned, Josh Wingerter and Jake Atwood give no ground to Crosby and Kaye. They each bring individual gifts to the table. Mr. Wingerter’s Bob Wallace is a crooner, most effective singing “Count Your Blessings Instead of Sheep” to young Susan. Mr. Atwood’s Phil Davis is a fast-moving chick-magnet wisecracker, who seems to set off a rifle crack when he shoots his cuffs. Very different in character, the two work nicely together. Mr. Atwood is a quadruple-threat critical favorite who acts, sings, dances, and plays a mean electric guitar. Mr. Wingerter’s post-education return to an active theater career is a welcome one. Community theater is so much more fun than computer science, sir! Don’t be a stranger. 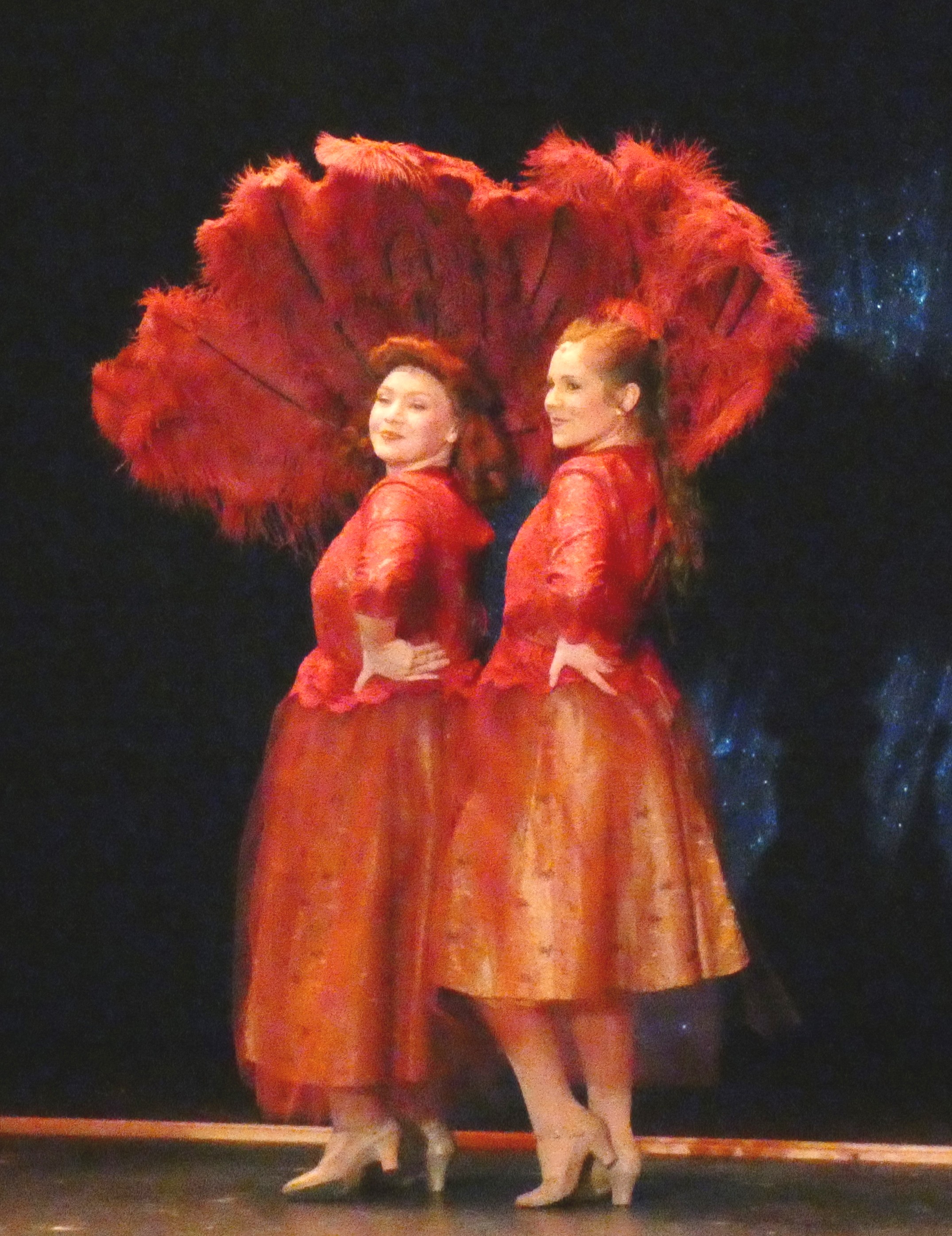 The co-female leads, Judy and Betty are played beautifully by Tasha Smith and Kaitlyn Terrill-Rose respectively. Ms. Smith is a delight. She made half the audience fall in love with her during “Meet Me in St. Louis,” and the holdout half falls in love with her this time out. Judy can do better than that lout Phil Davis, but we root for them, nonetheless, because Tasha Smith’s Judy wants him so much.

Kaitlyn Terrill-Rose is a revelation in her TMP debut as Betty Haynes! This lady dances on gossamer wings and has the best singing voice in the cast by a mile! In the program, she thanks her “YiaYia.” I have no idea who that is, but I add Drama in the Hood’s thanks to her YiaYia, as well, because your Kaitlyn is an outstanding performer, ma’am…or sir. The South Sound hopes fervently that “White Christmas” isn’t one-off for Kaitlyn Terrill-Rose, but wherever she goes and whatever she does on stage, success will follow her every dance step. She’s that good.

Gary J. Chambers brings a severe military bearing to his role as General Waverly. This choice, co-made by Chambers and Director Harry Turpin, is a good one, and it makes the occasional joke ala General that much more effective. Mr. Chambers has yet to bring less than a great game to the table in the four years Drama in the Hood has watched him work. He’s the consummate pro and an “Oh, good” when we spot him on a cast list. In this role, he fakes needing a cane, and his limp is spot-on consistent throughout. As we said, he’s a pro’s pro, even with a limp.

Aleks Merilo plays handyman Ezekiel. It is a small role, but he makes it his own. They say there are no small roles and Mr. Merilo proves the adage to be so with a really fine turn, with and without a mop for a partner.

In passing, we mentioned “young Susan.” The role is a shared one between Makenna Kelpman and Olivia Burns. Sunday afternoon was one of Miss Kelpman’s shows and she was great in it. Miss Burns’ resume’ would indicate she will be just as good. Go twice, so you see them both!

The ensemble is a valuable part of a show such as this one but, as such, individual members don’t tend to stand out. We wanted to mention one member in this ensemble. Madison Wingerter Ripley is fine as Rita the Hootchie Cootchie Girl, but she stands out for her movement skills as part of this ensemble! This young lady can move and the Princess Cruise passengers who have enjoyed watching her in shows over the last few years can attest to the fact. We look forward to seeing more shows in the South Sound from this young performer.

A classic show must have a classic orchestra and this show does not fail in that regard. The orchestral overture was particularly well done.

“White Christmas” sells itself to the mostly-mature audience that will fill the seats and the coffers of Tacoma Musical Playhouse this month. That said, TMP added an additional Sunday evening show to the end of the run for the overflow demand. So, if you were on the fence, get off the fence and on to the snow train to Vermont. You will be glad you did.