Bainbridge Performing Arts Returns to the Forbidden Planet in Style 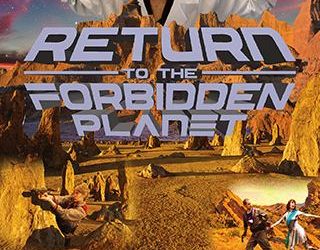 When playwright Bob Carlton wrote “Return to the Forbidden Planet” in 1989, it was hailed as potential stage genius. It turned out to be worthy of the hype, eventually receiving the Laurence Olivier award for Best New Play in 1988, and 1990. Dubbed as a Jukebox Musical, Return to the Forbidden Planet combines a healthy dose of Shakespeare, some solid comic science fiction, and iconic music from the latter half of last century. Always a favorite among community theater audiences, it is a staple of many of the better theater operations around the country. Locally, Federal Way’s Centerstage Theatre produced it last year, and Bainbridge Performing Arts opened it this past weekend. As always, BPA put forth a solid effort with an entertaining look at “The Tempest,” by way of Captain Kirk and Roy Orbison. Mercy…

A bizarre play deserves some bizarreness in its review. Theater reviews have a normal form. For the most part, we accentuate the positive, say the negative can improve and ignore Mr. In Between. We comment at length on the actors and their performances with a quick nod to sets, music, and the sound/light combination. Today, we begin with costume design for “Return to the Forbidden Planet. Take a bow, Ms. Pamela Weinzatl, because you and your team made a miracle take place in the form of Ariel’s (the Robot, for those unfamiliar) costume.

Helene Minassian was able to roll, dance, boogie to the music, and wax emotional inside that thing. It is a credit to Ms. Minassian’s talents, which are many as she was excellent, but also to the costuming department’s ability to put her in such a flexible robotic (see, it even sounds like a contradiction of terms) costume. Well done, and well worth a second paragraph shout-out. 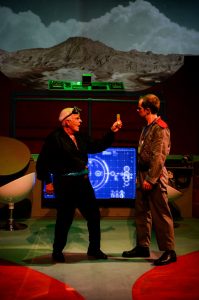 The role of Captain Tempest (character names are kind of in-your-face in this show) was played by Bob Reed. Captain Tempest can be played over-the-top. Many director/actor teams take that route. Instead, Director Ryan Patrick O’Donnell and Mr. Reed choose a more low-key approach. Captain Tempest doesn’t thunder as much as he blends in with the ensemble cast. It is a solid choice.

There is a love triangle in “Return to the Forbidden Planet,” as Captain Tempest’s rival for the affections of the fetching Miranda is the ship’s chef, Cookie (again, in-your-face names). Played by the talented Matt Howe, Cookie falls in love at first sight, only to be placed in the dreaded friend zone by a vision who teases him with a platonic kiss on the cheek. (Oh, the perfidy of the platonic cheek-kiss. I wonder if women know its power. Sure, they do. Oh, where was I?) Mr. Howe is great, as Cookie! With a singing voice a galaxy and a half the best of the males in the cast, Mr. Howe belts out his songs with power and confidence backing every note. The audience roots for Cookie, and Drama in the Hood will root for Matt Howe as he continues his stage journey. 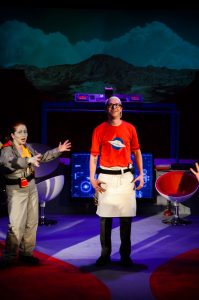 The bench was deeper on the female side of things when it came to singing prowess, but Meghan Newton, as Bosun, gets the nod as the top singing star of this show. The Bosun’s part is fairly small, but that’s ok. Ms. Newton played it beautifully, and we look forward to seeing her again, in bigger roles. If she gets to sing again, so much the better, She has a lovely and tuneful voice.

In South Sound theater, “Return to the Forbidden Planet” appears to be one and done for the lovely Megan Twamley. This is her west coast debut, and she is soon off to China to appear on a children’s show and teach English. While that is an enviable adventure, one hopes this is not the end of her community theater career. Her Miranda was excellently nuanced and a real highlight of this show. Megan Twamley is blessed with God-given vocal abilities that she has polished and burnished through practice and training. Godspeed to the far east, Ms. Twamley. You were great!

As Doctor Prospero, veteran actor Nelsen Spickard got to show off his own stage range. I’m not certain how recently he did “The Monster Mash” before this weekend, but his skill at it was undeniable. Was Dr, Prospero “just a boy whose intentions are good?” Unlikely, but Mr. Spickard’s intentions and performance were noteworthy. Another good job by an actor who is forever a solid casting director’s choice.

Science Officer Michelle Hensel was another fine part of this show. Her acting chops have been on display here before, but watching her at work never gets old. She brought breadth to the role of the Science Officer and solid vocals to the songs.

Almost everytime out, Bainbridge Performing Arts adds value to the show with solid musical backup performed by a live band. We can’t close without a nod to Trina and the Tractor Beams, under the apparent (going by the name) direction of Trina Williamson Jackson, who’s sound was classic and excellent.

Since you can’t go wrong with a show at Bainbridge Performing Arts, you may as well buy a ticket to this show and turn it into a season ticket. You won’t have more fun anywhere on the Island. “Return to the Forbidden Planet” is a good time inside a lovely theater. What’s better than that when you just know the rains are coming?