‘Romeo and Juliet’ Light Up Bloedel for Bainbridge Performing Arts 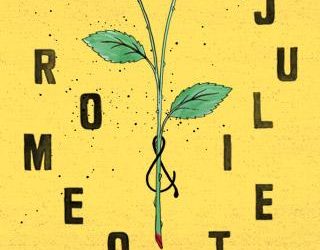 Every year, Bainbridge Performing Arts completes its theater season with an event that is a treat for all-comers. Called “The Bard at Bloedel” BPA performs a work of William Shakespeare’s as it was meant to be seen. Namely, under the stars in front of an appreciative crowd, many of whom are munching fried chicken. It is as much a celebration of summer as is conducted by any organization in the Puget Sound-area. This year’s Bard at Bloedel is “Romeo and Juliet.”

Penned by the prolific W.S. (unless you believe the rumors that he didn’t write half of his stuff) “Romeo and Juliet” is, arguably, the most popular of his efforts. Why would this one strike a sweeter chord than the others? Perhaps, because it examines so many different questions. Does love, ultimately, conquer all? More importantly, who is to blame for the demise of these two dreamy-eyed kids? Drama in the Hood was there to see the show on its Opening Night. We pondered the eternal questions. Sadly, we did it sans fried chicken.

Directed by the fabulous Kate Carruthers, this performance took some liberties with Merrie Olde England circa 1597 and the dialect thereof. The result was a show slightly Americanized in speech pattern and lighter in tone than any other Romeo and Juliet that we have seen in recent memory. Obviously, at the end of the day, it is a tragedy. But, the first act is performed comedically. Indeed, almost rollickingly so. It was an interesting choice and one that will work well for most of the people most of the time. 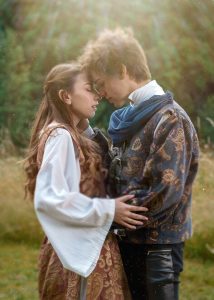 The lead characters in this show must have their heads in the clouds most of the time. One wouldn’t dare to, for example, ask Romeo to go to the store for a squab and two turnips. He’s too busy comparing his lady love to a sunset, and would surely return home with lamb and snow peas. Likewise, Juliet is more in love than anyone has ever, or will ever be, at least in her fevered early-teen mind. Gavin Michaels and Keara Dooley play R and J, and play them well. Mr. Michaels plays the star-struck lad with great skill, and his mop of curly hair makes him positively pretty. Ms. Dooley does an equally fine job. She’s at her best on the balcony, bantering with her nurse and mooning over her young man.

David Breyman’s Benvolio is excellent. He’s loyal to the Montague clan in general, and Romeo in particular. But, he is a peacemaker at heart. His visible angst as the swords start to clash is very nicely played.

Gary Fetterplace is a critical favorite in these parts and plays three roles, as well as a member of the chorus. In the first act, Mr. Fetterplace’s “Peter” carries the light-hearted tone very well, pantomiming the guest list to the Capulet party. But, he performed best as the tormented Friar. His head hangs and wags to and fro, as he ponders what he did and what he should have done. Mr. Fetterplace is one of this show’s brightest lights.

Dylan Zucati, as Mercutio, is a bit of a critical quandary. He will be some patrons’ favorite character. Particularly the young ones in the crowd will delight in his strutting, mugging, cavorting, ways. To be sure, Drama in the Hood recognizes that he is a gifted performer. Let’s just say that he will not be accused of underacting and his performance, in our opinion, could be toned down a bit, the better to fit in with the rest of his stagemates.

Kristi Ann Jacobsen serves as text coach backstage for this production. On stage, she is wonderful in the role of Juliet’s nurse. Part Mom, part BFF, and part nanny, Ms. Jacobsen is, in many ways, the glue that holds the show together. She works hard for BPA, in this show and others, and is a valuable part of the Bainbridge Performing Arts success story.

So, who is to blame for the untimely deaths of Romeo and Juliet? They knew each other for four days and offed themselves. Such a swift rise and descent means the kids had emotional issues and could have used medication and counseling. Their impetuousness is blamed by some.  The Montague/Capulet feud that only ended after tragedy could be blamed. What a waste to have waited to get along. Some will blame the Friar. Obviously, he went to pastoral lengths not recommended in the clergy handbook.

These are the questions that make theater-goers sell-out performances even though everyone knows the ending. Likewise, these are the questions that will make Bard at the Bloedel a smashing success. The first two performances sold out, so be a part of the next sell-out. You’ll be glad to have celebrated summer out there, with or without fried chicken.