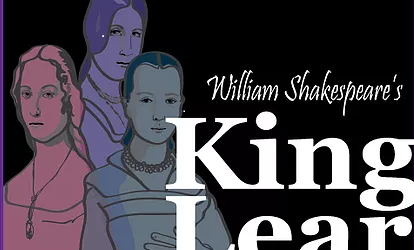 Seattle summers, short and usually sweet, offer the promise of much needed outdoor fun. If you love watching the bard’s plays out in the open, then you’ll enjoy Last Leaf’s production of King Lear. Early last evening as the sun was still beaming down on Volunteer Park, Last Leaf offered their rendition of Shakespeare’s dramatic exploration of dysfunctional family relations, aging, love, loss and madness. At the outset, Last Leaf declared their version of King Lear as abridged but true to the authentic language. At 90 minutes the play was able to deliver the key moments of the narrative in an effective and entertaining manner.

One of the points of the play is the destructiveness of a badly functioning family unit. In King Lear, Shakespeare gives us not one but two families who’ve hit rock bottom. Firstly, there’s King Lear’s clan. Lear’s an aged monarch who can’t resist cloaking his vanity in generosity.  Eager to test his three-daughter’s loyalty and love for him, he offers them a sizable chunk of his estate if they can openly espouse their love for him. His eldest daughters Goneril (played heartily by Kira Thorkildsen) and Regan (played admirably by Gilly Kelleher), delivers the love in verbose and vulgar spades. Lear like a puffed-up peacock, rewards these daughters gleefully. While Lear’s third daughter Cordelia, manages to enrage her father and finds herself disinherited because of her plain-speaking honesty. Lear is played steadily by Jay Rairigh while Audrey Herold gives a strong performance as Cordelia. While initially wishing that Rairigh played Lear with more aggression, in some ways his milder stabs at power-play effectively illustrate Lear’s decline, not just as a monarch and a father figure but also as a man who’s losing his grip on reality.

Lear’s certainty in his prowess dissolves when his two older daughters who appeared to stand by him now stand to hasten their father’s degradation and destruction. Goneril and Regan exemplify heartlessness when they refuse to accommodate their father in their grand estates and drive him out into the wild heath on a stormy night. Lear now wise to the enemies in his family lambasts Goneril with the well-known phrase, “How sharper than a serpent’s tooth it is to have a thankless child.” Just as Lear realizes what a fool he’s been to trust the daughters who flattered him just to feed their greed, Lear meets up with a poor lost soul who he takes to be a fool. Irony upon ironies, Lear was unable to see beyond his daughter’s masks and now again he’s fooled by a fool.

The so-called fool is Edgar (played with much skill by Kelsey Hamilton). Edgar along with his father Gloucester (played well by Wendy Joseph) and his illegitimate brother Edmond are the second dysfunctional family. Edmond (played with fervor by Kaya McRuer), is nasty. Edmond’s embittered by his illegitimate status and plots to incriminate his brother Edgar to become the sole inheritor of his father’s estate. As Edmond announces, bereft of a moral center, “if not by birth let me have land by wit.” His brain will win out over his genes, erasing Edgar in the process. Edgar like Lear has been driven out of his home after being slandered by his half-brother. But Edgar takes the disguise of the fool while remaining wise while Lear appears the wise one but is often witless. The play continues with many plot twists and reckonings that come too late. Despite being an abbreviated play, Last Leaf manages to deliver the drama, pain and dark humor that Shakespeare’s King Lear is known for.

Despite not having a stage or numerous props the Last Leaf crew are effective. Sparing a table, we mostly get the players and their enthusiasm. However, enhancing the atmosphere are some pertinent sound effects; the seashore sounds of waves and gulls effectively give us an aural experience of Dover. The players dressed in mediaeval garb and saddled with sturdy swords and much gusto easily get us to the play’s point. Watch out for some fantastic sword play and the cruel and bloody scenes of Gloucester’s eye-gouging by Cornwall (played by Nigel Thorkildsen) and Regan. The players’ intensity and efficient use of their time makes this version of King Lear, energetic and striking.