‘The Music Man’ Opens to Enthusiastic Crowds at Paradise Theatre

“The Music Man” opened on Broadway in 1957 and received five Tony Awards over the course of a successful 1,375 performances. The show’s success led to revivals and a popular 1962 film adaptation. Finally, in 2000 another turn on the Great White Way became a success as a new generation tapped their foot to “The Wells Fargo Wagon.” All good things. All the things that make up a hit show.

But, when Meredith Willson’s musical was made available to community theater groups, one wonders if Mr. Willson was surprised at the response. The show has been adapted for every community gathering from church groups to lodge productions to high school stage shows to community theater. In fact, due to the size of the cast, we daresay everyone reading this knows someone who was cast in the show at one time or another.

What makes it so popular? Well, it’s good versus evil with a twinkle in his eye. It’s kindled love when love seemed buried under ice. It’s children having the time of their lives on stage learning the magic and mystery of theater. But, moreover, it is an evening of escapist theater with more laughs per hour than most shows out there.

Paradise Theatre in Gig Harbor opened “The Music Man” this weekend to enthusiastic sellout crowds. It is the hit show Paradise needs at this time in her existence.

Flim-flam man Harold Hill rides into town on the train (Don’t be late for the train scene. It is the favorite scene for many.) He intends to bilk a corn-pone Iowa town of its collective money by promising a boy’s band while delivering zilch. Veteran actor Dan Engelhard calls this his Bucket List show and he does a nice job as Hill. Director Jeff Richards and Engelhard chose a lower-keyed performance than what is traditionally performed by a Harold Hill. As such, Engelhard works with the cast more than he dominates it Robert Preston-style. It’s an interesting choice and perhaps one that works best on the small Paradise stage. Mr. Engelhard’s singing voice is more than adequate.

Carrying the best singing voice in the cast is Briana Lobbett in the role of librarian Marian Paroo. Afraid of intimacy and terrified of men, Ms. Paroo must be thawed out. She’s so tightly wound the bun in her hair must be giving her awful headaches. Ms. Lobbett was excellent earlier this season when she played co-lead in Xanadu on this stage. She’s even better as Marian, with a vocal range to Iowa itself and back again.

The role in this show that lends itself to the one of the most over-the-top performance is that of Mayor Shinn. Cleverly, Director Richards looked for the best mayoral candidate he could find. Lo and behold (this show brings such expressions out) Richards found his mayor in the mirror! The malapropisms of His Honor are some of the show’s best moments and Jeff Richards performs them skillfully. When he tells his wife and daughter to “Watch your phraseology” the crowd responds well. 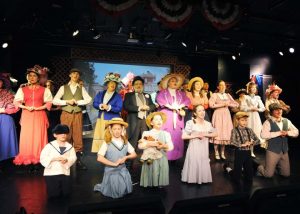 Mayor Shinn’s daughter Zaneeta is played by Peninsula High School student Maddie Bjorn. She epitomizes much of the show’s fresh-faced exuberance with her stage demeanor. The audience’s eyes are drawn to Ms. Bjorn, even in the ensemble pieces. That says a lot for this young actress. Look for her to continue to impress as she grows in her craft. If she would hear one suggestion it would be to slow down when she says her signature two-word exclamation. Take a moment and lean into “YE, GODS!”

Troy and Courtney Turnley play Ewart Dunlop and Eulalie Mackecknie Shinn in this show. Being on stage together brings out the best in these fine actors because neither has been better in recent memory. Ms. Turnley milks the dickens out of her Grecian urn tableau scene. The Family Turnley can be proud of their performances in this show.

Standout ensemble member Chelsea Pedro, as Ethel Topplemeier, was born to be an urn. Ms. Pedro performs well every time she’s on stage in this show, but her turn at becoming an urn was fantastic! If there was an award for urning, she would doubtless earn it.

Eli Ghorley plays Marcellus Washburn. He is the only townsperson to know the real “Doug” behind Harold Hill. Mr. Ghorley is a Paradise Theatre mainstay who is also a past master at stage physicality. Let me count the many walks of Eli Charles Ghorley. He struts, marches, swings, sways, squeaks, squeezes, lurks and lurches. He’s Michael Jackson! No, he’s Charlie Chaplin! He’s a valuable commodity for this theater and a valuable member of this cast.

“The Music Man” is about many things, but at its heart, it is about a promise made to children. As such, we cannot close our review without talking about some of the kids in the cast. In the 1962 movie, a young Ron Howard works through shyness about his speech impediment to blossom as an engaging little boy. Chase Nelson is decades too young to know Ronnie Howard, but he makes Winthrop Paroo his very own. Sure, he’s cute to the nth degree of “Awwww.” But, he is a fine young performer in his own right. Community theater takes the best little kids and helps them become the best big kids, so Chase Nelson is on his way.

Paradise Theatre co-chief Vicki Richards choreographed “The Music Man.” One would guess there are moments she feels like she’s herding cats. The cast is 35 strong and this stage comfortably holds maybe half that. But, she makes it work and work well.

It is a sign of the times in which we live that community theater operations are endangered. In one weekend, two of Drama in the Hood’s South Sound family members held fundraisers that had “survive” as a reason for taking place. Paradise Theatre is run by some fantastic people and supported by scores more. But, they are in a financial bind and need “The Music Man” to score with paying customers in a big way. It should, and indeed, it will. Those who love this Little Theater That Can would do well to support it through Act Local in its time of need because Pierce County on the northwest side of the Narrows Bridge needs good theater.

‘Barefoot in the Park’ a Classic New Year Show for Paradise
January 16, 2020
© 2021 Drama in the Hood. All rights reserved.
Site Design