Hamlet’s Haunted House of Sueños Captivates at 18th and Union 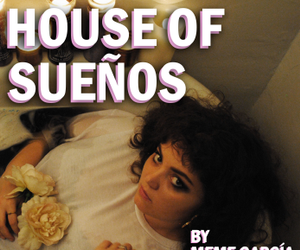 Before a word is spoken on stage, House of Sueños, directed by Wiley Basho Gorn from a script written and performed by Meme Garcia, lets us know it’s a ghost story. A single flashlight beam guides the audience to Garcia’s face, recalling late night horror stories told in hushed tones, as her young, haunted protagonist guides the audience to her two great, conflicting loves: that for her sister and for Hamlet. Light, guided confidently by Lily McLeod, is sparse- Sueños remains more shadow than light, the dark curtain of the 18th and Union Theater looming ominously behind the action. This thick atmosphere, upheld expertly by Garcia, McLeod, Gorn, and sound designer Megan Roche, is central to Sueños’ tantalizing appeal and exploration of the claustrophobic inescapability of memory.

House of Sueños began as Garcia’s senior year honors project, and is presented in a revised edition of her earlier work. It’s origin as a student work makes it all the more impressive. The action- essentially a non-chronological recollection by the protagonist of her sister’s increasing antipathy for her love of Hamlet– flies by while remaining thoroughly engrossing and patient. Many lines from Hamlet are read throughout the play, but one unspoken and certainly applicable to Garcia’s work is “brevity is the soul of wit.”

In only 45 minutes, Garcia manages an entire range of feeling- the initial, foreboding haunting; the oddity and terror of the unnamed protagonist’s older sister’s stories; familial anger. Surprisingly, even graceful humorous moments and asides make their way into the play without eliminating its tension.

All of this is of course carried by Garcia’s commanding, one-woman performance, as she darts between characters, moods, languages, and the “to be or not to be” monologue with ease. The play, as indicated by its title, is bilingual, an affect Garcia employs effectively to separate her protagonist from her sister, who becomes more and more prone to using Spanish as the protagonist finds herself further and further from it.

The play begins by asking the audience if they’ve ever seen a convincing ghost in any production of Hamlet. Between Garcia’s intense performance, the dim lighting, and a beautifully understated use of slow-building, and at times intentionally oppressive sound, the crew of Sueños subtly imagine the making of a ghost for the stage. The non-chronological happenings of Sueños further lend the production that ghostly feeling, as if you are witnessing something both fixed in time and existing, ultimately, outside of it. As a construction, Sueños is masterful.

House of Sueños is a haunted, haunting piece of theater, and a major accomplishment. Garcia and crew have created something truly special