Celebrate Pride Month by Seeing The Picture of Dorian Gray! 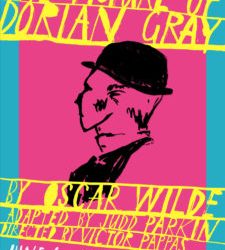 A forbidden love affair and hedonism and a mysterious painting that induces madness, oh my! All of these and more are featured in Book-It Repertory Theatre’s exquisite theatrical production of The Picture of Dorian Gray. Though once slammed by critics for being ill-moral (due to the homosexual relationship within the play), Wilde’s story about Basil and Dorian’s romantic affair still lives on today. Adapted by Judd Parkin and Directed by Victor Pappas, this story thrives on the Seattle stage today in theatrical form. Just in time for pride month!

This play centers around the madness that ensues over Basil’s portrait of Dorian Gray (his male lover). Infatuated by Dorian’s beauty, Basil decided to paint a portrait of Dorian. After seeing the portrait, Dorian begins to go mad. This madness spirals furthers as Dorian gets mixed up with Basil’s hedonistic friend Lord Henry Wotton. How much madness is the painting able to ensue? You will have to go to the play yourself to find out.

Of course, this madness would not be ere to less theatric if it weren’t dramatically acted on a marvelous set. Designed by Pete Rush, the set was simply astounding. The set is simple enough that it does not overshadow the acting in the play while also being elaborate enough that the setting was not just left for the audience to imagine. The conflict and emotions surrounding Dorian’s madness and Basil’s portrait were beautifully acted by the cast of this play. Especially exquisite acting was seen from Brandon J. Simmons. His mannerisms and emotionality while acting were truly phenomenal. The chorus of this play was also quite astounding.

The direction of this play was phenomenal. Being that the script of this play is mostly conversation-based, this play could get boring and stuffy (ere, Victorian?) quite quickly. Victor Pappas direction was such though that there was not a dull moment in this play. His direction was also artistically marvelous. Flashback scenes of the play were beautiful to watch. While watching Dorian’s madness spiral further throughout the play, the audience feels similarly like a bystander chorus member.

Don’t miss your chance to see this amazing production! This play is being performed at The Center Theatre at Seattle Center (Wednesdays-Sundays) through July 1st.  You can find out more info about tickets and buy them here: http://book-it.org/box-office/. This play would be great to bring your friend to who has deemed art as worthless. After the play, you could turn to them and exclaim, “don’t you ever say art isn’t powerful.” Also of course, you should see this play if you just want to see an amazing performance. Happy Pride Month theater nerds.