How I Learned to Drive a Must-See!

Paula Vogel’s Pulitzer Prize winning script is being performed on the Seattle stage this month. Performed by Strawberry Theatre Workshop (Why We Have a Body), this production is phenomenal.  The play’s protagonist, Li’l Bit, narrates the play, “to get the audience to go along for a ride they wouldn’t ordinarily take, or don’t even know they’re taking*.”

This play centers around the heart-wrenching story of Li’l Bit’s toxic and pedophilic relationship with her Uncle Peck. The play follows their relationship from beginning to end. Li’l Bit (the narrator of the play) is a teenage sexual assault survivor, and her story is powerful and captivating. Unlike most play narrations which are told in a clear straight-road sort of manner, Li’l Bit’s narration is not as straight-forwards, often diverging into different branches. Thus, the story is told out of order chronologically.  Being that the play is structured around memories told out of chronological order and muddled with ambiguity, the audience is left to put puzzle pieces of Li’l Bit’s story together.

Though car metaphors could easily become overplayed or overshadow the larger story in the play, they shine in this production. Car metaphors are brilliantly interwoven throughout this production to describe Li’l Bit’s story. These metaphors are used to frame scenes throughout the play and describe Li’l Bit’s story.  One metaphor, “Sitting Idly in Neutral Gear”, brilliantly frames the monologue acted by Peck’s wife (beautifully delivered by Shanna Allman) where she describes her story being a complicit bystander witness of Li’l Bit and Peck’s relationship.

The acting ensemble of this play is stellar. Li’l Bit is acted magnificently by Amy Danneker. Through her fantastic mannerisms, physicality, and vocalics, Danneker plays Li’l Bit in a way that tells Li’l Bit’s story profoundly. Uncle Peck, played by Frank Boyd also acted fantastically. Boyd’s acting was an amazing performance of manipulation. While Uncle Peck could easily be portrayed outrageously villainously to the extent that he become a villainous caricature, Boyd played him in a way that was humanly honest. 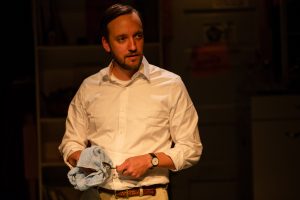 The plays discussion of sexual abuse, gender roles, domesticity, and objectification are thought-provoking. The set eerily highlights sexists ideals within the household of the play that are also embedded within American society. The costumes design in the play is also great at conveying oppressive gender roles carried by the characters while also capturing the individual personalities of each character.

This play is being performed Mondays and Thursdays-Saturday until July 7th at 12th Ave Arts MAINSTAGE. This play is a must-see, especially amidst living in a sexual abuse rampant society and the the recent #Me-Too movement. You can find more info about the play, and tickets here, or by visiting the website: http://www.strawshop.org/how-i-learned-to-drive.html . 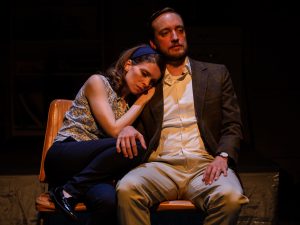