Divas in repertory at ArtsWest

This year, ArtsWest put forth an ambitious season of musicals and plays all speaking to the central theme of I Am and there could be no more fitting of a finale than the two shows Hedwig and the Angry Inch and Lady Day at Emerson’s Bar & Grill being presented in repertory under the unifying title Practical Questions of Wholeness. 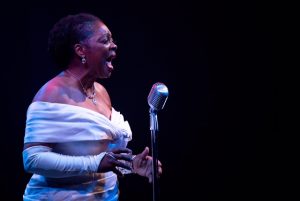 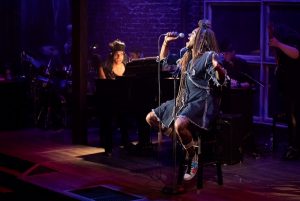 ArtsWest 2018 Hedwig and the Angry Inch

At first glance, the idea of pairing these two characters – a jazz songstress in the 1940’s and a genderqueer rock and roll singer in the 1990’s – seems pretty nutty. On the surface these two people could not be more different. After experiencing these two shows back to back however, nothing seems more natural or more astute than showing Hedwig Robinson and Billie Holiday as two sides of a shockingly similar coin.

With music and lyrics Stephen Trask and a book penned by its original star John Cameron Mitchell, Hedwig and the Angry Inch tells the story of Hansel Schmidt, a “little slip of a girly-boy”. From behind the wall in East Berlin, Hansel meets an American GI who (along with his distant and controlling mother) railroads him into a sex change, a marriage, and an escape to America. The transition to female does not go super smoothly and Hansel-turned-Hedwig is left with one “angry inch”. The marriage goes about as well as the surgery and Hedwig is left in Junction City, Kansas to fend for herself. Through 90 minutes of everything from glam rock, to punk, to power ballads, to straight up, no holds barred, frilless rock and roll we watch the evolution and eventual stripping down (literally and figuratively) of Hedwig as she tries to pull together the pieces of herself that have been cut away. 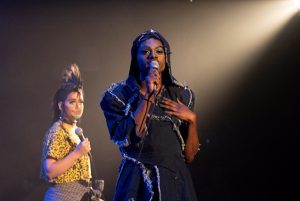 ArtsWest 2018 Hedwig and the Angry Inch

The success or failure of the endeavor that is Hedwig and the Angry Inch falls squarely on the shoulders of its titular character. The amount of power and charisma it takes to pull off this non-stop rollercoaster of a show is immense and Nicholas Japaul Bernard has an embarrassing amount of both. Hedwig on the page is not the most likeable of characters. She is constantly berating and dominating her husband Yitzhak as well as taking shots at various audience members. However, Bernard brings such a sincerity and vulnerability to the role that you can’t help but fall in love. Bernard is also able to oscillate between the raw, roaring vocals of songs such as “Angry Inch” and the much more melodic and sweet “The Origin of Love” on a dime and sometimes within the same song. It is the very definition of a tour de force role and performance. In the much more thankless role of Yitzhak is the excellent Dani Hobbs. It takes an exceptional talent to shine through the flash and glitter. Hobbs demands attention and makes it clear why Hedwig is in constant fear of being overshadowed by Yitzhak’s talent. Hobbs finds, throughout the show, shades and layers to play in what could easily be a one note, sad sack of a character. Also, their high belt (which seems to fall out of their face like it was nothing) is not to be ignored or trifled with.

The final ingredient needed for a truly great concert is a rocking band and this group, led by the incredibly talented Chris DiStefano, is that and so so so much more. To a person, they are masters of their instruments. If that weren’t enough, they are so believably a part of the world of Hedwig. Each member of The Angry Inch (the name of the band) has a clearly drawn character with distinct physicality and personality.

The second night of this two-parter features Lady Day at Emerson’s Bar & Grill by Lanie Robertson. Lady Day is a recreation of sorts of one of the last performances given by Billie Holiday. The framing device (just as in Hedwig) is that of a concert where, through songs and stories, we get a peek into the history and psychosis of one of Jazz’s most famous tragic figures. 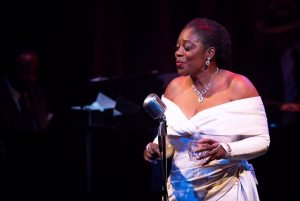 As is the case with Hedwig, Lady Day is entirely dependant on the talent of its leading lady. The incomparable Felicia Loud is as captivating and charming a presence as anyone could want or expect. From moment one, Loud had the audience in the palm of her hand. There were many times I found myself holding my breath, not wanting to miss one moment or syllable coming from the stage. One of the major challenges of playing such an iconic personality, is that the entire performance can become one long impression. This could not be further from the case in this production. Loud fully inhabits the character, even responding to various noises and reactions from the audience. There is not a moment on the stage that comes across as false or inauthentic. She is able to fully express the pain and strain of an abused vocal mechanism while still pulling out the haunting beauty of Holiday’s unique voice. Loud has as her only companion onstage, the superb pianist Darrius Willrich playing Holiday’s accompanist Jimmy Powers. He spends the show in the background, using the piano to guide Holiday and keep the show on track.

While the world of Hedwig is fantastical and glamourous (though shabbily so), Billie’s stage, designed by Christopher Mumaw (who also serves as scenic designer for Hedwig), is bare save for the piano, microphone, and stool. Even the sound and lighting design, done for both shows by Stephon Jamaa’l Dorsey and Tristan Roberson respectively, is much more natural and understated. All of this leads to Billie having far fewer things to hide behind. While Hedwig can shield herself behind her very persona, Billie is a fragile, open nerve from the beginning.

Both Billie and Hedwig spend the night trying to mend themselves through music. In Hedwig’s case, we are riding the wave of her story as she avoids the one song that will allow her to heal and move on as a whole person. In Lady Day, we are trying to follow the fractured path of Billie’s mind as she desperately searches for the right song, any song, that will bring her some measure of peace.