Stay Soft: a night of gender interrogation and rejection 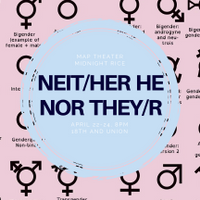 “First, just listen.” This simple, powerful phrase invites the audience of Neit/her He Nor They/r into an intimate space of euphoria and heartbreak, passion and devastation, tragedy and humor. Director Evan Price directs in this sequence of monologues, contemporary and classical, each chosen to represent a facet of gender. Four transgender and non-binary actors dazzle the audience with literary interpretations that are simultaneously deeply personal, and yet universal.

Price and their productions are pioneering a new trend in theater: an invitation to the audience not just to feel the palpable emotion, but to contribute their own response to the product displayed in the theater.

The intimate brick house on 18th and Union buzzed with electricity as, one by one, queer and non-binary performers melted and forged the words of literary greats and emerging writers alike into their own personal mirrors.

Perhaps the most famous monologue in English literature became unrecognizable, a brand new work of art in the hands of actor Jasmine Joshua.

There are people in the theater reviewing world who believe that representation, or what they refuse to call anything but “political correctness,” is irrelevant to a review. They believe that diversity, justice, and action belong elsewhere, not in their theater. Price’s masterpiece proves that this vision is outdated at best, retrogressive at worst. The sheer euphoria with which these actors performed when they were not just permitted but invited to share all facets of themselves was stunning. Several of the performers shared past experiences of their gender identity complicating or even preventing professional advancement. In a world defined by the gender binary (male roles, female roles, male dressing rooms, female dressing rooms), to perform in a show specifically tailored for them was a new a joyous experience.

Neit/her He Nor They/r is a must-see for anyone who has ever felt silenced and unwanted. Enter a room created just for you, catered to tell a story you have always needed to hear but never had the words to tell. Seize the opportunity to meet Evan Price, because they will be skyrocketing to the top before you know it. There are only two nights left, what are you waiting for!