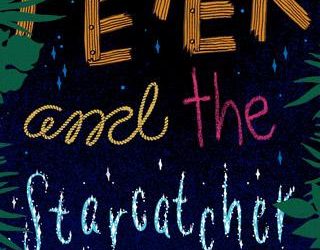 The legend of Peter Pan is a well-remembered one spanning over 11 decades. Indeed, J.M. Barrie introduced the lad as a baby in a turn of the 19th Century adult novel. It wasn’t long, though, until Peter starred in his own book. As the forever young Boy Who Could Fly he embodies freedom and fun to young people everywhere. Since making his literary debut, Peter is the titular role in five movies, and three movie adaptations, most recently in the Warner Brothers 2015 work titled “Pan.”Bainbridge Performing Arts opened “Peter and the Starcatcher” this weekend.

It took the mind of humorist/novelist Dave Barry, though to imagine Peter before Pan and the Captain before Hook. In Rick Elice’s “Peter and the Starcatcher,” we learn their origin. Moreover, we are educated about girl power, and its essential nature to how bad becomes good and wrong becomes right. Fun for all and a learning experience, it is a welcome addition to Puget Sound theater this season. BPA is one of the area’s most accomplished playhouses, producing one of the season’s fine shows.

BPA never fails to cast some of the area’s most talented children. Whether for “A Christmas Story: The Musical,” “Mary Poppins,” or this show the kids always do an outstanding job holding their own against adult cast members. As Peter, interestingly enough billed as simply “Boy,” Julian Mudge-Burns is great. Playing against him, though, is Sophie Eldridge as Molly Aster. It is not an exaggeration to say that Sophie stole the show. Her Molly is the embodiment of pluck, a necessary characteristic of someone who is going to save the day.  While Peter has delusions of grandeur along with real courage, Molly sets out to be the heroine, for the simple reason that someone has to do it. From accent to delivery to her accuracy of movement, Sophie Eldridge nails it! The two youth leads are exceptional and two of the main reasons this show works. 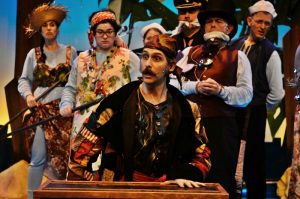 Jason Gingold and the ensemble cast of Bainbridge Performing Arts “Peter and the Starcatcher.”

Black Stache’s crew includes Kylee Gano, in the role of Smee. As Jason Gingold stood out in Big Fish, likewise did Kylee Gano. In that show, she was called “the heart of the story” by one reviewer. She shows at least as much ability in this show. Ms. Gano improves every play in which she appears.

Good lead roles are nice, and key supporting roles are essential, but no show succeeds without solid performances up and down the cast list. Lisa Wright’s Mrs. Bumbrake is great as a lusty captive. Colleen Gillon bends gender as dentally-challenged Bill Slank, a welcome addition.  Jaron Boggs and Libby Clements are amusing as Fighting Prawn and Hawking Clam respectively. Sadie Gingold’s Ted and Nelsen Spickard’s Lord Leonard Aster were good in smaller roles. Sadie is Jason Gingold’s real-life daughter and it was a pleasure to see them on stage together.

Bainbridge Performing Arts always stages their plays superbly. This set was tricky, because of the intricacy involved and the different perspectives that were necessary. Scenic Designer Robert Selander and Master Carpenter Gary Fetterplace came through as the champions they are for Director Ken Michels. It’s a beautiful set, made more lovely by its utility. The set itself helps move the action. The set crew deserves kudos.

Is “Peter and the Starcatcher” fun because it is a swashbuckler? Sure, but that’s only about half the reason. The script is sprinkled with enough pop culture references that they, occasionally, run into each other. The show runs 2.5 hours, but how could it not? It tells an important story while “dabbing” at Queen Victoria a dozen times and making references to the theme of Taylor Swift’s discography. Suffice it to say that this is a long show, but no one there was wishing for it to be shorter. That’s a sign of quality theater.

Bainbridge Island is home to 24,404 lucky souls. There is abundant natural beauty everywhere they look. There is also quality theater downtown. “Peter and the Starcatcher” hits its notes with grace, skill, and occasional spit-take hilarity. What more could patrons need? Locals should see this show, maybe more than once. Across the water, Seattlites should celebrate the longer days with a ferry trip and a night with BPA.