The Impossibility of Now WOWS

Love is not love, which alters when it alteration finds.

“Let me not to the marriage of true minds
Admit impediment; love is not love
Which alters when it alteration finds,”

Utilizing a highly original plot, outstandingly witty dialogue, a fabulous musical score, interesting recognizable stereotypes, who go through profound character development, great acting, and a set to die for, all put together by an expert director, this romantic comedy for the middle aged, delivers the goods. And how!

The plot revolves around a middle-aged married couple, Carl, played by Terry Edward Moore, a very successful and well-paid science writer, and Miranda, a moderately successful poet and poetry teacher, played by Betsy Schwartz, who had fallen out of love long before Carl lost his memory in an accident. N.B. It is a lot easier for a science writer to get paid big bucks and any poet who actually gets published and a teaching job is in the top 10% of poets, it is just supply and demand which determines the discrepancy.

When Carl comes home from the hospital with Miranda, he remembers nothing about life, his environment, himself, his work or their relationship. Miraculously, he has also undergone a complete personality change.

Carl takes child-like delight in all the new things he learns and he especially enjoys the very sounds of the new words he is learning. Previously, in his behavior to his wife, Miranda, he had been silent and withdrawn, so she is more than a little confused.

His new personality thrusts her into a terrible dilemma vis-à-vis her rather slimy lover, Anthony, played by Joshua Carter, because she no longer has sufficient reasons for leaving her nasty jerk of a husband, who suddenly adores her and whose joyfulness is infectious.

Without disintegrating into a bedroom farce, the various struggles between the two men over Miranda are incredibly funny, but not in the way usually portrayed in romantic comedies.

On every level this production was outstanding. First there was a simple highly effective set, with a beautiful backdrop by Roberta Russell, which accommodated the different scene changes easily. Immediately upon entering the auditorium, the audience was captivated by the up-beat circusy accordion pre-show music, composed and performed by Matt Lutwak, Michael Sakarias and Sound Designer Lucky Peckham. The music, which was right on the money, set the tone of childish joy for the whole show.

Y York, the playwright, is to be commended, as the structure and the dialogue of this play were both outstanding. It was well-plotted, the characters were recognizable stereotypes, the dialogue was witty and demonstrated the playwright’s joy as a wordsmith. One could also imagine that the playwright had been a marriage counselor, as she was so perceptive about the travails of married life; how relationships disintegrate, and how to re-integrate them. And it was done with comedy and joy rather than nastiness.

Casting by Cornelia Duryée Moore was perfect. Terry Edward Moore as Carl was able to convey the confusion of someone who has lost his memory and the childlike joy of re-discovering the fun things about the world and life. Furthermore his character endeared itself to the audience because Carl lacked any sense of bitterness or frustration about his new found incompetence. Like a circus clown, he took all his failures in stride and just kept taking delight in learning, even when he failed and made a fool of himself. 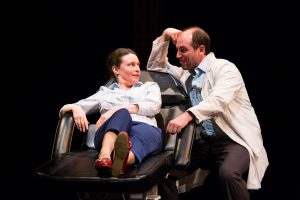 Betsy Schwarz, as Miranda, the confused wife, delivered a fascinating performance, with all the mood swings of a wife torn by conflicting emotions: loyalty to her husband, but frustration with the relationship. On the one hand, she enjoyed the flattery of a new lover, but was unsure about plunging into a new life. As she is the pivotal character, the plot depends on her psychic changes.

Director, Daniel Wilson, brought all this together, great acting, set, music and of course a play that offered profound insight and joy. On opening night, I would say that it was occasionally a little slow paced, but I would guess that with such a competent cast, this will change.

All in all, The Impossibility of Now is well worth seeing, as it will probably become a BIG HIT nationally. I noticed that the crowd was mostly middle-aged, but I think the young people might like the comedy.