You Can’t Take It With You Showing at Center Theatre

Last night at the Center Theatre at Seattle Center Armory, Moss Hart and George S. Kaufman’s comedy You Can’t Take It With You opened to rapturous applause.  Directed by Teresa Thuman, the narrative centers on the eccentric personalities of the Vanderhof family in their New York home in 1936.  When Alice (Ayo Tushinde) becomes engaged to the wealthy businessman Tony Kirby (Corey Spruill), she worries her family’s unconventional behavior will undermine her relationship.  And when the families’ first meeting goes disastrously, Alice is ultimately forced to decide between her family and a chance at love, all while government forces threaten the family over unpaid income taxes.

The play begins with Penny (Shermona Mitchell), Paul (Gurvinder Pal Singh) and various other members of the family and hired help performing their respective jobs or participating in leisurely activities around the house.  They are interrupted as Alice comes home just before dinner and announces the imminent arrival of a gentleman caller – Tony Kirby, the Vice President of the company for which she works.  Penny tells her daughter to invite him to stay for dinner with the family, though Alice refuses because of their plan to spend the evening at the ballet.  While she prepares herself upstairs, her family anxiously waits to meet Tony.

Mass excitement follows when someone arrives at the door, but it quickly fades when it’s just an IRS representative investigating Grandpa (Teotha Dennard).  Grandpa politely refuses to pay his income taxes, humorously explaining his reasoning, but the representative doesn’t find it funny, and he leaves hurriedly after warning that jail time will be unavoidable if the money is not payed.  When Tony arrives shortly after, he is fawned over and interrogated by the family, particularly Alice’s sister Essie (Bo Mellinger) and Penny, who wants him to propose to Alice.  When Tony brings her home later that night, Alice frets that her family’s eccentricities would prevent a sustainable relationship with him.  He manages to convince her otherwise before proposing and she excitedly accepts.

A week later, Alice and her family plan for the dinner they’re hosting the following night.  It’s a celebration of Tony and Alice’s engagement, and Mr. and Mrs. Kirby (Bob Williams and Laura Steele) will be attending.  The family’s typically busy evening turns to disaster when Tony unexpectedly arrives with his parents, prompting panic and confusion among the residents of the house.  Underdressed for the occasion and embarrassed, the family invites their guests to stay, trying to pass the time until a makeshift dinner can be prepared.  At Penny’s suggestion, the families play a game, but it reveals intimate details about the Kirby’s marriage, offending them and prompting Alice to cancel her engagement to Tony due to her embarrassment.  The situation escalates with the sudden arrival of government agents, who subsequently arrest everyone in the house due to several unfortunate misunderstandings with Ed (Aaron Jin) and Paul’s respective hobbies.

In the last act of the play, Tony attempts to convince Alice to rescind her termination of their engagement, a romantic sentiment that is challenged by his father, who seeks to reestablish control over his son’s life.  In a dramatic and comedic conclusion, Grandpa confronts Mr. Kirby and Alice, reminding the former that material wealth is only so valuable in one’s life and attempting to stop his granddaughter from making a grave mistake before his own fate is ultimately determined by the government, regarding the taxes he never paid.

The set design for the production is impressively detailed, evoking a sense of realism and immersion into the world of the play.  The performance space is quite large, and the set sprawls accordingly, the stage shaped somewhat like a funnel that expands outwards from the archway leading into the home’s entry hall.  The living room walls are painted red and white and decorated with dozens of miniature paintings and other artistic renderings while seats and couches surround a fireplace on the left side of the stage, a piano and desk balancing the space on the right side.  Several doors lead offstage to the kitchen and cellar, and a staircase leads up out of the entry hall, indicating the size of the residence and establishing in tandem with the extravagant furniture that this is a family of wealth.  Though the setting never changes from the family’s living room, the characters do move furniture within the house several times, most notably whenever arranging themselves around the dinner table that occupies the center of the room.  From the ceiling, a small chandelier dangles above the dinner table and a gramophone, a typewriter, and a printing press are placed around the room.

The costumes are fun and period appropriate clothing mostly, though there is the obvious divide between upper and lower classes, as is reflected in the way some of the characters dress.  Mr. Kirby and the government agents dress in sleek suits, while Grandpa and the other men in the Vanderhof home wear attire that is perhaps a little less formal.  And though Paul and Mr. Depinna (Laurie Lynch) frequently wear goggles and filthy leather aprons over their clean dress clothes, they do so because of their constant experimentation with the fireworks stored in the cellar, not because of their social positions.  Likewise, the female characters dress in considerably formal clothing, though Essie dresses down for her ballet lessons.  Several costume changes are performed throughout the show for various characters, often for comedic purposes, with the funniest being Mr. Depinna’s appropriately described athletic Roman outfit.

While the sound design for the play was phenomenal, its best element was easily the incorporation of early twentieth century music made to sound like it was playing through the gramophone tucked against the wall.  However, the sheer volume of the sound effects – especially those of the fireworks – could make it difficult to hear the lines of some of the performers.  In addition, during several scenes in which many characters are talking at once or onstage events have elicited panicked yelling from the characters, it can be difficult to distinguish what it said.  Thus, viewers may want to consider sitting as close as possible to the stage.

Moss Hart and George S. Kaufman’s work is an absolute pleasure to watch, and Teresa Thuman’s diverse and exceptionally talented cast convey a relatable story of fear, heartbreak, and isolation while managing to balance these darker elements with wisdom, absurdity, and laughter.   Don’t miss the opportunity to see You Can’t Take It With You at Center Theatre. 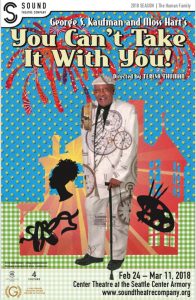 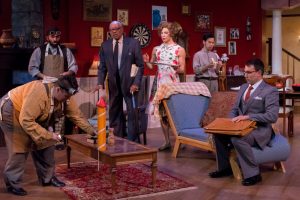 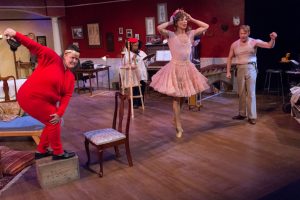 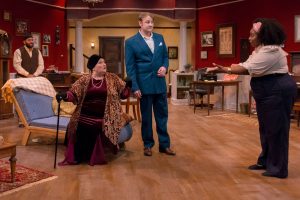 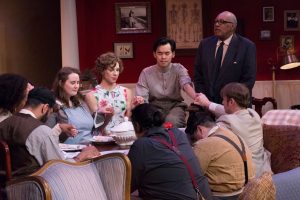 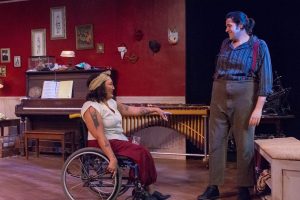 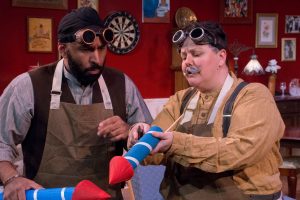 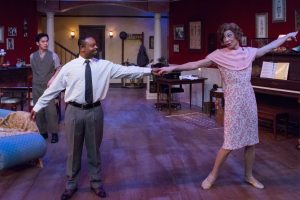 All photo credit to Ken Holmes.