It is the stuff of drama and angst to be at war with the place one grew up. Songwriter/singer John Mellencamp explored this territory in “Jack and Diane.” Playwright Tennessee Williams’ work output is dotted with examples of conflict in Southern upbringing. In “Cat on a Hot Tin Roof” Southern patriarchy is called on the carpet in the form of “Big Daddy.” Williams further explored the pull and tug of his home region in “The Glass Menagerie.” Lakewood Playhouse continues its 79th season of shows with this thoughtful and dramatic show. 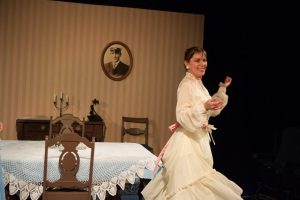 A dysfunctional family, struggling in the throes of The Great Depression. That’s the set-up for “The Glass Menagerie.” Family matriarch Amanda Wingfield has her hands full. Her children, Tom and Laura, are each damaged in their own way. There is barely enough money to keep food on the table, much less to keep the electric company at bay. In this life of quiet desperation, Amanda holds to the Southern axiom, “You can say whatever you want to say about someone, just as long as you add ‘Bless her heart.”  Trapped in the time of “gentlemen callers,” and cotillions, Amanda is shadowed by her husband, who long ago fled the family unit. His oversized portrait looms over the dinner table as a constant admonishment. In what can only be an optical illusion, the portrait seems to grow larger over the course of the action on stage.

Dayna Childs plays the fading flower, Amanda. A ravishing beauty in her day, at least in her own mind, Amanda veers from concerned mother to ridiculous cooing dowager/flirt over the course of the production. Ms. Childs’ experience with the material (she first played Laura three decades ago) is evident as she owns her role. She purrs and thunders, often just seconds apart, taking the audience on an emotional journey into a heart of glossed over despair.

Ms. Childs’ standoffs with son Tom, played by Niclas Olson, are some of the shows great moments. The two glare at each other with venom. Tom sniggers behind his mother’s back, as adult children have done since time began. Mr. Olson is the Managing Artistic Director of New Muses Theatre Company, also in Tacoma. New Muses does heavy drama, so Niclas Olson is in his sweet spot in the role of Tom. Director Michael O’Hara uses Olson very effectively in a dual role. He’s Tom, but he also conducts the action in a very real way as the show narrator. To be sure, no one raises and lowers the lights with quite the Southern flourish as does Nic Olson.

Jess Weaver makes her Lakewood Playhouse debut in the role of Laura, and it is a successful debut. She’s beleaguered by a club foot, but Laura’s greater handicap is her painful social anxiety, predictably downplayed as “shyness” by her mother. This young lady is more than shy. She’s trapped, barricaded behind fears and doubts insurmountable to her. As the audience watched Ms. Weaver interpret the role of Laura, they were left to hope this won’t be the last time her artistry is seen on this stage. Laura’s pain sends her to the fainting couch in full retreat from the world around her. Maybe sleep will help, but maybe nothing will help. It is a powerful depiction!

What, or who has Laura in such a state? Well, high-school flame-at-a-distance James O’Connor is coming to dinner, at Tom’s invitation. What a mess for poor Laura! Forced into a setting from which she recoils, Laura only hates herself for her afflictions all the more. As the evening progresses, will she come out of her shell? If she does, will there be a positive payoff? That’s the question facing an audience member unfamiliar with the story.

Nick Fitzgerald plays O’Connor. It is the smallest role in the play, but the role on which much of the plot twists. Falsely humble, but possessing just enough Psych 101 babble to be dangerous, O’Connor sets out to help Laura. Mr. Fitzgerald’s James O’Connor is unctuous and debonair, traits to endear him to Mom. However, what will his imprint on Laura become? Fitzgerald layers the portrayal with each layer precise. Michael O’Hara brought out the best in his players, but none more so than in the case of Nick Fitzgerald.

Costume designers Rachel Dimmig and Blayne Fujita’s outfits were actual characters in the show. The 30-year old “gown” donned by Amanda Wingfield elicited snorts from her son, but also nervous chuckles in the crowd. Well played by the costuming pros, too often overlooked.

James Venturini’s sets for “The Glass Menagerie” are spare, and appropriately so. The country is broke, and few broker than the Wingfields. The balcony from which looms Tom-as-narrator is a fine addition.

What could improve this show? Actually, very little on stage, and Lakewood Playhouse is currently undergoing extensive improvements in infrastructure, making an already fine theater even more inviting. However, the programs handed to the patrons have a problem. Oh, the content is fine and the ads are well-done. The reproduction of the actor’s headshots is abominable. These fine actors DO NOT have marred and pockmarked faces, but the programs say otherwise.

That said, the stage and crew output for “The Glass Menagerie” is sterling. It’s a professional job by a theater staff that continues to find its way, show after show. Lovers of community theater should see it. Those who love classic drama and/or Tennessee Williams should be online as we speak. Bless their hearts.

Centerstage’s ‘Let There Be Love” a Deft and Clever Work
February 4, 2020
© 2022 Drama in the Hood. All rights reserved.
Site Design