Modernized Mozart at the Seattle Opera 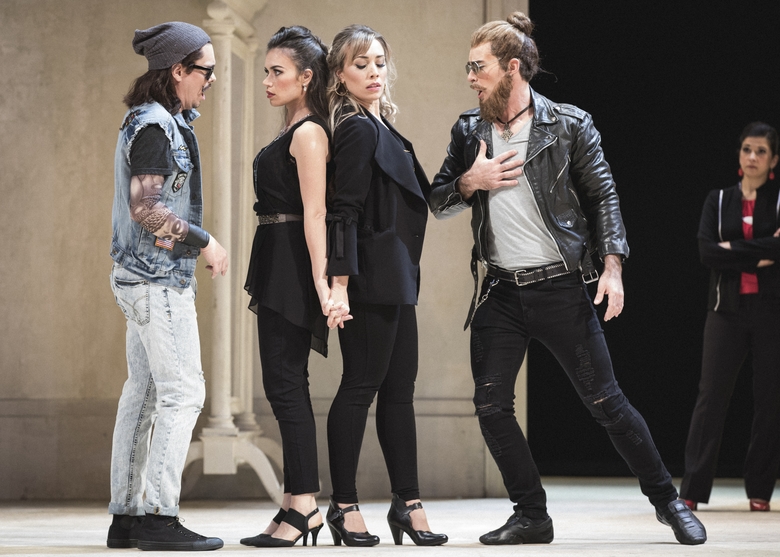 When Mozart’s opera Così fan tutte was first performed, it was seen as crude and tasteless and beneath the talents of the illustrious composer. Since then we all came to our senses it has become one of the most produced operas worldwide.

This particular production, originally staged by Jonathan Miller, has been done all over the world including its beginnings in London, to New York, and even in Seattle.

Our story begins in medias res with two spiffy looking gentlemen, Ferrando and Guglielmo, insisting on the unwavering faithfulness of their respective girlfriends, sisters Fiordiligi and Dorabella. This leads to a wager with the calculating Don Alfonso who insists that no woman can remain faithful to man. Cue the enticing sisters giggling and comparing photos of their men and proclaiming their undying love. The giggling is not to last, however, when Don Alfonso enters with the news that their beloveds have been called to war. It’s all tearful goodbyes and lingering embraces as Ferrando and Guglielmo pretend to ship out. Silliness and hilarity ensue as the boyfriends come back disguised as mustachioed hipsters from Portland and Don Alfonso (aided by the sisters’ PA Despina) attempts to win the bet and prove the changeable nature of a woman’s love.

The tone is set from moment one with the lively overture conducted by the fiercely energetic Paul Daniel. The interplay between the instruments is sprightly and flirtatious and is directly mirrored by our amorous couples onstage. In a departure from Mozart’s two previous operas Don Giovanni and Le nozze di Figaro, instead of having one titular lead, the true star of this show is the ensemble as a whole. This makes the chemistry between the characters critical for the success of the production. In a move that almost feels like cheating, real life sisters Ginger Costa-Jackson and Marina Costa-Jackson play onstage sisters Dorabella and Fiordiligi respectively. (These roles are sung on alternating performances by Hanna Hipp and Marjukka Tepponen) Their  interactions together onstage are captivating. They have an ease and comfort to their physicality that can not be manufactured. Marina has an incredibly dynamic and agile instrument which goes perfectly with the full, warm, and lusty tones of Ginger.

Playing beautifully off of the two sisters are the swoon-worthy Craig Verm as Guglielmo and Tuomas Katajala as Ferrando (sung alternately by Michael Adams and Ben Bliss). Katajala brings to his gorgeous tenor tones a sweetness and sincerity. Verm has all the swagger and commanding baritone one can muster while still rocking a man-bun.

Rounding out the main cast is Kevin Burdette as Don Alfonso and Laura Tatulescu as Despina. Burdette is the perfect blend of manipulative puppet master and suave gravitas of a Nathan Detroit type. Tatulescu brings charisma and capability to the stage though the design and direction seem to diminish some of the power and femininity often associated with the role of Despina.

Though this was a production previously done at Seattle Opera in 2006, the costumes have been expertly updated by Cynthia Savage. The set, originally conceived by the Royal Opera House Design Department, is a bright and open though deliberately unfinished. One of the most prominent set pieces is a massive full-length mirror in front of which each character spends significant amounts of time primping and preening. Especially in Act I, it is clear that everyone, especially the couples, are making sure they each look their part whether it be the macho soldier, the grieving girlfriend, or the bohemian hipster. They are all playing on only the most surface level. This makes the more solemn Act II feel all the more authentic and its consequences all the more lasting.

While the updating of a classic work can seem kitschy (and, believe me, this production is not without kitch) the cast is so all in that they force the audience to come along on this crazy ride. The stage is bursting with joy and fun and selfies and smartphones (and even a shout out for Uncle Ike’s!). Even in the more melancholy moments, there is an energy and commitment that is endearing.