Experiencing Two Trains Running, a revival of August Wilson’s famous play, was like taking a step back in time. The play is set in 1969 in a working class, black neighborhood known as the Hill District in Pittsburgh. The action takes place entirely in an ordinary restaurant that serves home cooked food like corn bread, chicken, ribs and beans. The set by the way is fantastic; a beautifully rendered and believable restaurant replete with a real food, a phone booth, a Rock- Ola jukebox, yellow vinyl backed chairs, a blackboard menu and a front door that slams with a tinkling bell and a satisfying thump. The backdrop seen through the restaurant- numerous telephone poles and hanging wires, effectively add to the urban feel. The actors have a credible stage in which to bring to life August Wilson’s story.

All the characters in the play are black, working class people trying to find their way in a changing world. That world is being reshaped by urban renewal, the civil rights movement and the shifting and loosening of social norms. The restaurant is owned by Memphis (played by Eugene Lee), a black man born in the 1930’s who moved north in the Great Migration. Memphis is forced to reassess his position in life; spurred on by the loss of his restaurant to a city development project. Even though Memphis was the victim of unjust legal action in the south where unscrupulous white people cheated him out of his Jackson, Mississippi farm, Memphis is confident that in 1969 he can avail himself of justice. He has faith that he can petition the courts to force the city to give him a fair price for his restaurant. Other characters similarly believe in the possibility of change and hope for the future.

Along with Memphis, other characters who also experienced hardship, believe in their betterment. There’s Sterling (played by Carlton Byrd), a young man just released from prison, who is inspired by Malcom X’s belief in black pride and black power. While Sterling hasn’t yet formulated a practical means to realize his dreams, he is dissatisfied with the high level of incarceration for black people and the dismal and unjust job prospects that black people face. Carlton Byrd plays Sterling with exuberance and magnetism. Likewise, David Emerson Toney who plays Holloway, gives a vivacious portrayal of a man who’s labored all his life for not much reward but never the less continues to fight for the human cause with a winning spirit. Holloway’s, well-informed and pragmatic views on life are seasoned with his unexpected confidence in a local faith healer. We never see Aunt Esther, a 322-year-old wise woman, but we hear testimony of her effectiveness. Holloway is convinced that Aunt Esther with very unconventional methods, healed him of his anxiety. Consequently, Holloway is convinced anyone can change their luck. 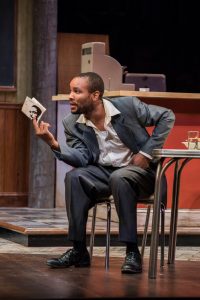 Tempering this faith in a positive future are a set of characters who are more moderate in their outlook. There’s Wolf played with much verve by Reginald Andre Jackson. Wolf has the most dynamic hair style and colorful 1960’s attire; yellow pin-striped pants, a tan leather jacket and a revolving set of kaleidoscopic- colored polyester shirts. He’s a hustler who makes his living organizing number betting. He also has several sweethearts in different towns. Wolf is happy with his life but wary of rose- colored illusions. He’s adamant he doesn’t want to have children because he understands life is very difficult. Another character, West, is the dapper, astute and financially successful funeral home owner. Played with style and finesse by William Hall Jr., West has faith in his own abilities to run his business and he’s content in taking care of number one. West doesn’t look forward to improving civil rights and neither does he offer any work to the eager Sterling, despite being in a good position to do so. There’s also Hambone, a developmentally challenged man played steadily by Frank Riley III. For nine and a half years, Hambone has been appealing to his neighbor for past dues- the hambone he believes he’s owed. Even though Sterling tries to educate Hambone with some of Malcom X’s ideas, Hambone remains the sad figure of a man stuck in time, unable to move on. Likewise, the only woman in the play is arrested by her own fears.

Risa is played with a touching combination of humdrum nonchalance and concerned sagaciousness by Nicole Lewis. She’s a young woman working a dead-end job as a waitress in a restaurant slated for closure. Her mundane job is wearing her down, but she still manages to champion Hambone and is always kindly to him even when Memphis tries to get rid of him. Risa is the least satisfying and disappointing character. While all the other characters are given ample space to tell their stories and reveal secrets about themselves, Risa is an enigma. Oftentimes the little we learn about her, is told through the eyes of the men around her. Memphis treats her as the hired help, constantly nagging her to pick up dishes or put the bread in the fridge. The men often comment on the visible and numerous self-inflicted scars on Risa’s legs. They guess that she self-harmed to ward of unwanted sexual advances from men. Despite the men’s’ questioning, Risa never offers up her own story. She rebuffs their questions and advances regularly. The only time she lights up is when she talks of her faith in Prophet Samuel. But early in the play when the Prophet’s death is announced we wonder what’s left for Risa to fight for. Perhaps this is August Wilson’s way of showcasing the way that the Civil Rights movement failed to fully capture black women’s dreams for themselves. With that in mind, this play has been very effective in capturing an important moment in history.

While congratulating the play for its overall success in tackling serious concerns, it must be noted that the play is full of the entertaining rumblings of humor. There are some especially funny moments when West talks about the coffin requests by the families of the departed. Risa manages to impress with her deadpan waitress tactics. The men’s banter about luck and how to capture it are simultaneously serious and amusing at the same time.

Two Trains Running is an entertaining, thought- provoking trip back in time which lays bare concerns that are all too relevant in our own time. The play is well directed by Juliette Carillo. Carillo, is an award-winning writer, filmmaker and theatre director. The lighting, sound and scene designs are well executed and add to the wonderful atmosphere created. Written in 1991 as part of August Wilson’s ten Pittsburgh Cycle of plays, Two Trains Running was a 1992 Pulitzer Prize nominee.