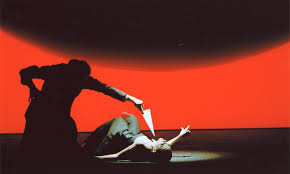 Georg Büchner, the author of the plays Woyzeck, Danton’s Death, Leonce & Lena and the novella Lenz, is one of the most influential authors of German Literature, but perhaps the least prolific, due to his untimely death at the age of 23.   Unfortunately the play, Woyzeck, which made his international reputation, was left unfinished at the time of his death in 1837. When it was produced in 1913, it burst onto the world stage and ushered in German Expressionism.  Stage One Theatre at North Seattle College has just opened an interesting production of this strangely appealing but flawed play.

In his short life, Büchner managed to be: a poet, a translator, qualify as an M.D., get a job as a lecturer at a medical college, a revolutionary who had to flee Hesse in Germany and hid out in Strasburg, France, where he wrote the fragments which became Woyzeck.

Significantly he was also a member of the “Young Germany”  (Jünges Deutschland) movement (1830-18350) along with the famous German poet Heinrich Heine.  “Young Germany” was an intellectual and literary movement in opposition to early 19th Century Romanticism, which had focused on the feelings of the individual and not on social action.

“Young Germany” on the other hand did focus on the outside world and social action.  When the German states were far from democratic, “Young Germany” supported socialism, democracy, rationalism, freedom of thought and expression, separation of church and state as well as Jewish and female emancipation.  They opposed absolutism in politics as well as “obscurantism”  the restriction of knowledge.  Büchner himself also participated in discussions in humanist philosophical circles, as a student.

The play Woyzeck was based on the first murder trial in Germany to use the insanity plea.   It was also the most notorious forensic psychiatry case of the 19th century.   Eminent doctors gave evidence  both for the defense as well as  for the prosecution, as to whether the accused was guilty or not-guilty, by reason of insanity.

In the play, as in real life, the highly unstable Woyzeck stabbed his common law-wife to death in a fit of jealously. In real life the legal process as well as the moral debate, as to whether one should execute a man who suffered from hallucinations,  went on for years until Woyzeck was publicly beheaded.

As the play opened, the soldier Woyzeck, as a result of his extreme poverty, has subjected himself  to medical experiments for extra money to support his wife and child.  The  unscrupulous doctor, played by Steven Sterne,  forced him to eat a diet of peas only.  He goes through various brutalizing and humiliating episodes, all the while experiencing starvation,  hallucinations and uncontrollable mental torments.  His wife, -the only bright point in his life, betrays him,  her new lover humiliates and beats him up and he goes bezerk.  Along the way, there are various discussions about the effects of poverty, philosophizing about the  human condition and  morality,  and a fair amount of hypocrisy is revealed.

Three are three things which make this play extremely challenging to direct. One is the translation; in German ponderous discussions about existential topics do not come across as quite so ponderous, as they do when translated into English.  Much of what little humor there is, is completely lost in translation.  Secondly the structure of the fragments is not exactly a well-constructed play.  It is also highly depressing subject matter.

However, director Daniel Tarker, and especially costumer Amy La Zerte added a lot of creative touches to make this an interesting staging of this play.   Most of the costumes were in vibrant red and black-two colors which suggest power and rage.  The simple yet highly effective sound effects by Michael Owcharuk , effectively communicated to the audience the intense mental torment of the mentally ill Woyzeck.

As Woyzeck, Chris Mayse did a reasonable job, he had a lot of great facial expressions, and delivered his lines with a certain amount irony,  but his performance seemed too subdued, lacking energy and intensity. The pacing was slow, partially due to the excessive scene changes.

Staging any play with a lot of short scenes is not advisable on a proscenium stage as changing the set pieces slows things down. Perhaps this was due to opening night, but I felt that the cast needed to pick up the pace and the energy level to make this material reach the audience.

Since productions of this historically important play are few and far between  I would recommend going to this production.