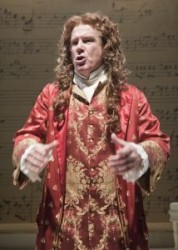 Hearing performances of the Messiah has long been a major musical highlight for me during the holiday season. Last year I even joined the sing-along Messiah they put together in Wedgewood and had a ball! I had no idea that the story of Handel’s composing of the work and its first performances in London had such dramatic intrigue behind it. Taproot Theatre’s season closer, Joyful Noise, brings alive the story of the birth of this classic piece.

The play’s central characters are facing some hard times in 1741 London. Susannah Cibber, a talented contralto, has been accused of adultery and is suffering from a venereal disease picked up from her lover who went on to drop her. She has been separated from her child and is ready to give up the game. This role could easily slip into melodrama, but an immensely talented Allison Standley keeps it from occurring. Her work is focused and heartfelt throughout. Susannah’s main rival is Kitty Clive (Molli Corcoran) who is having only middling success acting in Shakespeare productions and would like nothing more than to sing Handel’s next work.

Jim Gall is Handel and seems to be having a great time with the flamboyant role. I last saw him as Kurt Vonnegut in Book-It’s Slaughterhouse Five; this part could not be more different. Here a bemused Handel is on the outs with seemingly all of London, angry that they are not appreciating his latest opera. He browbeats the tiny crowd that shows up for the production. Even his benefactor George II (Frank Lawler) is losing interest in keeping Handel afloat. The king complains that the composer’s music “Does not come to my heart.”

It is up to an eccentric librettist, Charles Jennens (Kevin Pitman) to inspire the great composer when he brings him a meditation on “the Mystery of Godliness”, the Messiah. Joyful Noise recounts the remarkably bumpy ride that work makes toward its opening in London. An ambitious Bishop Henry Egerton (William Kumma) leads a protest against the production, believing it blasphemous to present a religious piece in the town’s theaters. To make matters worse, Handel’s women soloists are literally at each other’s throats. The onerous conflicts facing the composer add extra significance to the Messiah’s lines “He was despised and rejected.”

Director Scott Nolte keeps the action moving briskly straight toward its moving climatic scene: the London premiere of Handel’s masterpiece. He has assembled a talented crew to do the job. Pitman does solid work portraying the temperamental Jennens. Lawler’s George II is charming and sympathetic throughout. Standley and Corcoran have beautiful voices and employ them to great effect as Handel’s soloists. And finally, a tip of the cap to dialect coach Marianna de Fazio. Both the British and German accents sounded spot on to my ears.

The play, written by Tim Slover, premiered in Coronado, California seventeen years ago. Director Nolte observes that the production emerged shortly after the horrors of 9/11 and served as an important reminder that “light will conquer the darkness.” Amid these often somber days of late 2016 it is a very welcome theme to be sure.

Joyful Noise appears at the Taproot Theatre in the heart of Greenwood, 204 North 85th Street. It will run through October 22. For more ticket information call 206-781-9707 or go to www.taproottheatre.org/but-tickets/.