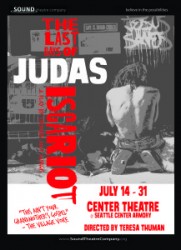 .Next Case! Shall Judas Iscariot go to Heaven or Hell?

Mothers stick by their children when they have no one else, even in Death by suicide. In the gripping opening monologue of Stephen Adly Guirgis’s 2005 masterpiece The Last Days of Judas Iscariot, Judas’s mother Henrietta wails her grief. As a woman and mother she recalls his birth as a burst of light. She buries Judas after his suicide from despair at the irreversible consequences Jesus, his leader and friend, suffers by his betrayal. She gets no help from the other Apostles; no other friends came either.

Teresa Thuman founded Sound Theatre Company in 2006. She directed her large cast of 16 with a skilled yet light hand. One simply knows she gave each actor the freedom to go deep into the motives and essences of each role. The multi-layered set by award winning set designer Brian Boyd (a Kennedy Center Celebrated Teaching Artist), gave her a concrete structure. The actors move up or down levels as a visual key to their station, emotion, or situation. She used the whole stage, the aisles, and even seats in the audience for the three-person jury. A complex play like Last Days requires a confident master director, and Guirgis has one in Thuman.

This play puts Catholic myth and theology on trial.  The question is: should Judas be condemned to hell or allow himself to be forgiven by Jesus and go to Heaven?

The setting is a courtroom in Hope, downtown Purgatory. The play opens with Judas lying in a state of catatonia in a cracked earth shallow pit at the lowest level of the set and his mother Henrietta (played with heart-tugging sorrow by Kathy Hsieh) crouching and crying over her ordeal of burying him.

Poof! From out of the wings Fabiana Cunningham (was Guirgis suggesting she was part fabulist and part cunning?) approaches presiding Judge Littlefield with a “writ from Peter” ordering an appeal for Judas. Caitlin Frances plays Cunningham with a spine and focus. Still, had anyone been able to rouse Judas from his frozen mental-spiritual state he would have said not to bother.

Littlefield denies the motion with relish, repeatedly. Henrietta has a touching seen at the side of the rigid Judas and describes how just one red tear dropped from his eyes and fell to the earth and became a ruby. A while later though, a second tear fell that was clear. Encouraged, Henrietta nagged God to grant an appeal.

It helps when praying to God to secure the assistance of a saint. She could have no better advocate than St. Monica, the mother of St. Augustine, the father of the Church. That’s right, she says, “without my son Christianity would be a bastard church.” Before she nagged God into bringing Augustine into the spirit of religion he lived a hedonistic life. Hearing Henrietta’s please, the matron saint for nagging takes up the cause and by the time she leaves the stage Cunningham has a new writ, signed by God himself. St. Monica is triumphant, exiting the stage saying when she makes a commitment you will get what you want, “signed sealed, and delivered.” Shemona Mitchell as St. Monica inserts a great dose of comedy and levity at just the right time.

Yusef El-Fayoumy (played by Yusef Mahmoud), appears as the prosecutor and the issue is joined.

In a sense, none of the characters have much arc or change to their personalities. As Guirgis scholar Constance Alicia Falconer notes, this play explores the “timeless debate between divine mercy and free will.” I can also add Guirgis also explores the role of Judas’s mental health as a contributing factor to his actions.

Though the topics may be lofty and philosophical, the dialogue is in the language of the streets of New York—tough, unrestrained, and without any regard for propriety and manners. Funny lines abound serving as a counterweight to the weighty topics under question.

Called to the witness stand were:

Satan (twice) … Ray Tagavilla wearing a brown Gucci suit, brown shoes, with red socks. Tagavilla felt sinister and when he turned up the “heat” on Cunningham and El-Fayoumy by reciting their multiple short-comings it got noticeably warmer throughout the house. Was that a whiff of sulfur? Satan also has one of the funniest lines of the play: “God didn’t write the Bible, you know that … right?”

Mother Teresa … Eloisa Cardona. Mother Teresa is hard of hearing and Guirgis brought her in to show the complexity of judging others. Upon accepting the Nobel Peace Prize Mother Teresa condemned abortion. Yet the good mother accepted donations from people who defrauded people out of millions of dollars.

Caiaphas the Elder … Keith Dahlgren (who also played Judge Littlefield). Caiaphas is trapped between the Romans who are quick to brutally suppress rebellions and serving “his people.” But Cunningham has him by pointing out that he so very quickly turned over Jesus, a Jew and Rabbi, to Pilate. How was he protecting “his people” then?

Simon the Zealot … Corey Spruill. Simon is played as a black militant and his testimony highlights the great friendship between Christ and Judas. Guirgis may been tapping into the discovery in the 1970s of a third century document known as the Gospel of Judas which is a series of dialogues between the two and shows Judas as a co-conspirator of Christ with an understood plan to release his spirit from his body. This may account for some of the confusing lines in the New Testament during the Last Supper where Jesus reminds Judas he knows what he is to do and to get to it.

Sigmund Freud … Sujay Chattopadhyay. Cunningham called upon Freud to point out that Judas’s poor mental state was evident by his suicide. El-Fayoumy during his cross examination calls him “Dr. Fried.” When corrected says, “Forgive me, I made a you-slip.”

Pontius Pilate … Malcolm J. West. West plays Pilate as someone serving out an assignment in the field as his duty but with little enjoyment. It certainly isn’t Rome, he says, and “if this is the Promised Land, the Jews should have held out for a better Promise.”

(The defense calls for the pop singer Tom Jones, but the judge excused him because he is still living.)

Judas (Jose Abaoag) remains catatonic during most of the play except when he is a character in a flashback scene or, at the end of the play, talking to Jesus. Judas betrayal and suicide shocked his personality and left him in this catatonic state.

Jesus (Jesse Smith) speaks at the end of the play about his Loving Presence everywhere, including scenes of the news from this week’s headlines. It comes as a shock, and a great reminder that the archetypal dynamics of betrayal and forgiveness, patience and love, forever vie and intertwine in our hearts and society.

Trials are long, plays are shorter. At three hours (with one intermission) the show would gain punch with some trimming.

Warning: The play and contains so-called adult language. I discuss how some English words became taboo in the note at the bottom of my review of Guirgis’s The Motherf**ker with the Hat.