The Tragedy of Hamlet, Prince of Denmark 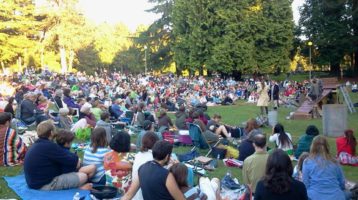 Having recently been thoroughly enthralled by Conner Neddersen’s  performance in Strawberry Workshop’s Production of 9 Circles, I was so excited to see him play Hamlet, that I dragged my 12 year old grand-niece and nephew to  Wooden O’s outdoor staging of William Shakespeare’s The Tragedy of Hamlet, Prince of Denmark at Luther Burbank Park on Mercer Island.  Neddersen’s performance was outstanding; unfortunately, it was the only thing that made this production worthwhile.

Hamlet, one of the most important plays in Western Literature, is Shakespeare’s account of an old Scandinavian tale about a dispossessed prince named Amlethi, which was written and re-written several times during the author’s lifetime. Within this revenge  play, dealing with philosophical, psychological and existential themes,  are several linguistically challenging monologues, containing profound insight into the vicissitudes of life.

When Nedderson spoke the complicated Elizabethan prose and verse it was as if the words were his own.  He was more than able to communicate the character’s emotions, motivations, hopes, fears and of course his humorous hoodwinking of the court at Elsinore.  All the celebrated monologues: ” To Be or Not To Be” etc. were delivered superbly and the audience was completely drawn in.  This is as it should be, because Hamlet, like all of Shakespeare’s play, is a LANGUAGE play,  that is to say, language is the most important element.

Unfortunately, none of the other actors even came close to being able to communicate the expressive language of Shakespeare.   One of the actors spoke in perFECT iAMbic PENtaMEter, which was tedious,  one spoke above her optimal pitch,  others rattled their lines,  some didn’t breathe at all.  One actually made the lines his own but had such bad diction that the lines came out mumbled.  There was a lot of incomprehensibility in this production and it wasn’t just because of the bad sound system, because every time Neddersen’s Hamlet came on stage, he was easily understood.

Even if actors are not well trained or experienced, even if a vocal coach is not on board, a performance can always be improved by getting actors to do diction exercises, improve breathing, and helping the actors to make the text their own. Too many of these actors were just detached from the text.

As far as directing was concerned, it was technically competent, the actors moved around the stage adequately, but there were almost no interesting or creative touches. Hamlet has been performed over and over again, and this production did not offer anything new to my understanding of the play.

Over the years I have seen some stunning productions at Seattle Shakespeare Company/Wooden O : Ibsen’s The Doll’s House, Molière’s Tartuffe, Brecht’s Mother Courage and recently  Shakespeare’s Romeo and Juliet, so I was disappointed that this production fell short of those high standards.  It was especially disappointing since outdoor Shakespeare is usually the first exposure most people have to Shakespeare.  It should try to de-mystify the complicated language for people, who probably would never pay to see a classical play.

I would recommend this show for Connor Nedderson’s exquisite performance, but I would leave the children at home.

Pericles, Prince of Tyre Triumphs at Shakespeare in the Park
July 14, 2022