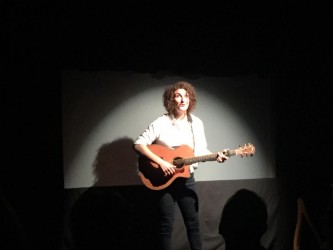 Seattle’s most beloved comic, Bridget Quigg, opened her new show, Techlandia, a tribute to all that we love and hate about the technological evolution of Seattle , on Friday at Theater Schmeater. For those of us who have been around the tech revolution for more than 25 years and are perhaps married to the first generation of “geeks” it was nothing short of therapeutic laughter.

For example, in the 50’s young girls were told never to sit on a man’s lap, never to go to a man’s hotel room and to stay away from fraternity parties. Quigg recounting her experiences working for Seattle high tech companies updates this advice to:

Quigg’s show captures the particular zeitgeist of our era, when it is not the popular crowd in high school, who go on to be successful, but the weirdest of the weird, who end up being rich and powerful, without having to go through behavioral modification to do so. The more aspergerish one is, the more successful one will be in Seattle geek culture. There is even a hilarious sketch about teaching basic greeting rituals to the techies.

Techlandia mixes power point presentations of news broadcasts plus an introduction and conclusion with a psychic named Schwanda, played by Quigg. At the beginning of the show, Schwanda looks into her crystal ball and predicts that humans will evolve a new form of communication-the “box” which will supersede all other types of communication. Quigg then plays different characters both on and off the screen: a newscaster recounting how ruthless high tech recruiters are in Seattle, an upbeat human resources type in a start-up, herself and how she evolved from being a writer for health-care to working with geeks.

Unique to her show are some audience participation games which are just plain hilarious and really nail some of the true insanity of “business speak” as well as her songs. One in particular, “You Are the Founder” to the tune of “We Are the World”  delivered in the style of a Joan Baez protest song from the early 60’s but whose words can be summed up by Gordon Gecko’s famous quote “Greed is Good.   Quigg’s velvety singing voice and excellent guitar accompaniment made this and her other songs delightful.

For those in the tech community this is a must see, for those driven out of formerly bohemian neighbors by the tech community’s high rents, this is a highly therapeutic show. You will laugh, you will cry. Like all good comedy, Quigg delivers profound truth.