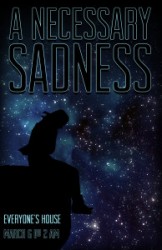 Danielle Gregoire found her inspiration of her A Necessary Sadness shows from John Koenig’s Dictionary of Obscure Sorrows.* People voluntarily respond to her call for a 5 minute set on a sorrow in their lives. This is just one of many current public spaces for the sharing of personal stories with a room full of strangers. Other examples in the Seattle area that come to mind are the Moth StorySlam at Fremont Abbey (which Gregoire also hosts) and the Fresh Ground Stories Meet-Up at the Roy Street Cafe on Capitol Hill which was inspired by The Moth.

Gregoire uses her years of experience in stand-up comedy to structure the show. She introduces the evening and the teller. The tellers have five minutes each to speak of their sorrow. Because of this format, every show has a different list of tellers.

As someone in the audience I felt like a transgressor for letting this person reveal themselves so openly and honestly. They don’t get to hear my sorrows and the one-sideness of the balance of information felt awkward.**

As the host, Gregoire launches the evening with a history of the inspiration of the project and her experiences moving to Seattle and finding stand-up comedy. As part of this journey, she began and hosted the Comedy Womb at the Rendezvous Lounge in Belltown. This is a very safe space for female comics to come and learn their craft. A while ago she gave her material to other comics and turned her attentions to storytelling. Before introducing the first teller she shares her own personal Week in Sorrow.

To protect the identity of the people who shared I did not write down any names. It is my self-imposed code of confidentiality.

Teller1 from around the age of 8 began to refuse to smile. Then at 13 and 16 she tried to kill herself. The counselor she worked with after the second suicide attempt revealed the secret: it’s okay to have feelings and show them.** When she feels sad now she allows it, and it’s also ironically the times when she feels most alive.

Teller2 couldn’t help weaving some of his comic set-up—punch line skills into his set. He said people say bad things come in threes. He thinks the number is actually seven. A small benefit from a life insurance policy when his mother died whiffs through his hands and he is physically hurt, financially broke, and carrying $100,000 of credit card debt before he absorbs the life lesson that spending money won’t bring back someone you love.**

Teller3 had an abusive childhood and after her last sorrow turned up Adele’s Hello and belted out the song with her.**

The evening continued in this vein.

To bring us up from these emotional depths, Gregoire invited one of the comics to do his 5 minute comedy set and one of the tellers and Gregoire sang Mal Blum’s Fine! The last lines of this song are:

The tellers come for their turn and the audience is a random collection of the curious and attentive, but Gregoire lives through every one of these shows. She finds it rough going to hear all this sorrow. She said before this opening night that this might be the last run. Then she mentions that Bumbershoot has invited her to submit an application. It is an emotion to need to carry on after one feels ready to stop.**

* The Dictionary of Obscure Sorrows is not a translation of an ancient and forgotten text from a recently discovered burial site. It is the real and ongoing project of Koenig’s. He says on his information page that “each original definition aims to fill a hole in the language—to give a name to emotions we all might experience but don’t yet have a word for.” For example, Zenosyne is the sense that time is going faster. Watch for a new word and definition every other Sunday on YouTube.

** There should be a word for that.