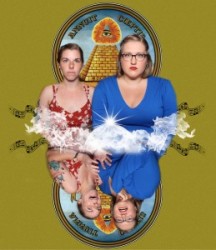 Love Snack is the comedy duo Baylie Freeman and Caitlin Obom. These women are busy creatives. Caitlin makes vines, vlogs, writes songs, and performs in this duo and as part of the sketch comedy troupe Drop the Beer and Run. Freeman is also mixed up heavily with DTBAR. The pair met while at Evergreen State College, both receiving a secret degree in comedy.

For this production, the duo are keying off the common feeling that all of the power moves in the world, from Wall Street to unmarked prisons to major international trade agreements, are controlled by the same secret organization: The Illumanati. The established story of the original Illuminati, as offered up on Wikipedia, is that they were formally suppressed by Bavarian rulers and the Roman Catholic Church and survived a short 9 years. But, that’s merely a cover, and now as an outlaw and underground organization they have been implicated in everything from the American and French Revolutions to the New World Order. We’ve all fallen under the hypnotic sway of the Illumanati and have to “trend just to stay alive.”

There are some who feel that the founding fathers of the US were in the organization because of the coincidence of the year each began: 1776. That all seeing eye on the back of the dollar bill is rumored to be an Illumanati symbol.

That eye design looks dated, like it was designed a couple hundred years ago. The crack design house of Love Snack has infiltrated the hyper-secret conference of the Illumanati. With an artist’s pad and Sharpie, they diagram a fresh logo that would appeal to millennials who survey data show prefer sleek designs. It is a great pitch. Wait, there’s a flaw: they have to return to the drawing boards because their design resembles female genitalia when turned 90 degrees.

That will have to wait until they are released from interrogation by themselves (thanks to the wonders of video editing). There are several of these grainy black and white hidden camera segments that are funny. As the interrogators they are very stern and wear trenchcoats and dark glasses. These segments are extension of news headlines about torture conducted in secret prisons, which is not so funny.

As this is billed as a musical, singing and dancing abound. The duo open with their rousing anthem calling us to join the Illuminati. They express their hatred of Dan Brown in this song. I guess Illuminati hate him for revealing a much older secret society in one of his novels. All secret societies are really the same.

One song is a dance aerobic video styled as produced in the 1980s for indoctrinating the masses. Each of the hypnotic steps and repetitions is tracked to the alpha, delta, beta, and theta brain wave patterns . Very clever.

This year’s Fringe Festival is sticking to local acts. Judging from the audience reactions this is a good idea. From experience around the comedy and sketch circuit many guessed correctly that Love Snack would offer up a delightful evening of comedy sketches and inventive songs.