Fringe 2016: The Life and Death of Peter Pan 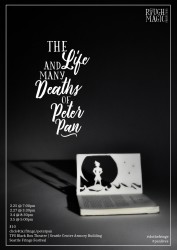 For Leah Adcock-Starr, the director of The Life and Death of Peter Pan in this year’s Fringe Festival, Peter Pan is a new Myth. Though she writes in her blog that she was comfortable with the idea of growing up when she was a child, the story still touched something in her. With the help of her husband Kieran and a talented ensemble of actors she has brought to the stage the troubled and tangled adult life of Peter Pan’s creator: James Matthew Barrie. The furnace of fame and fortune has fused JM Barrie the person to Peter Pan the Myth.

There is a moment before a tragedy when in retrospect one lived in a personal Eden. That moment for Barrie was when he was 6 and his brother David was 14 and away at boarding school.  Barrie “shadowed” and admired David and he had a happy and loving mother. When David died from an ice skating accident at the school he lost his whole family: David due to Death and his Mother due to unceasing grief and a mythologizing of David. To her, James could never measure up.

But Barrie could not stop time and biology. By 1904 he had grown up despite the trauma and tragedy. Though of course his age kept advancing, he was physically smaller than he might have grown had he not been traumatized. He was an established playwright for the London stage. The opening of Peter Pan or The Boy who would Not Grow Up at the Duke of York’s Theatre on December 27, 1904 took Barrie to a whole new level of fame. The show ran for 145 performances. Not only his life but those of the 5 sons of Arthur Llewelyn Davies who served as the inspiration for the work were changed forever. He had begun to meet these brothers in 1897 during walks in Kensington Gardens.

In 1907 the boys’ father Arthur Llewelyn Davies died of cancer. Their mother Sylvia died three years later in 1910. The boys where now orphaned, so Barrie adopted them.

This work is a hybrid of many theatrical forms which lend a fluid, dreamlike quality to the piece. This quality is heightened by the multiple uses of white sheets as: tent cover over a child’s bed, a sheet, the screen for shadow hands and stick puppets projected onto it by flashlights, a dining room table (!), and death shrouds. Rough Magic Productions strives to keep their shows to a minimum of props. The rest of the set in this show was a four-posted bed on wheels and a treasure/toy chest.

Interestingly, this production has the Llewelyn Davies boys (or the “Lost Boys” as JM Barrie referred to them) played by women. These roles are fluid as well. Now, they are part of the ensemble of boys, now they are adults at a social party, now one plays his mother, or Sylvia, the mother of the boys, or Mary, his wife. Generally solid performances by Nick Rempel as Barrie, and the ensemble of Grisha London, Corey Lynn Atencio, Mimi Santos, Taige Kussman, Annelih GH Hamilton, and Charissa J. Adams.

The workshop production of this show in February at the Penthouse Theater on the UW campus had the title The Boy Who Couldn’t Grow Up. It’s clear when comparing the two that this new version of the show not only has a more fitting name, it weaves in the sad and tragic elements of Barrie’s life. There is a recurring scene between Barrie and his beautiful actress wife, Mary Ansell. She keeps asking if he loves her. He keeps being distracted or overly shy. For the record, some scholars think they never consummated their marriage with sex. When Mary eventually found the love she needed in the arms of one of Barrie’s friends he divorced her.

Peter Pan the mythic figure never ages or changes. JM Barrie’s life was beyond his creative powers to make of it what he wanted.