Seven Ways to Get There 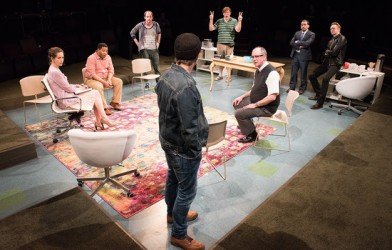 The world premiere of Bryan Willis’ and Dwayne Clark’s original play Seven Ways to Get There brings to the ACT Theatre mainstage a play about male anxieties and the coping strategies used to handle them, presented by ACTLab and DeeJayCee Creative Ventures.

The play opens on two people, a therapist (Kirsten Potter) and her client, and at first you think, Oh, excellent, the protagonist is a female psychologist, how interesting. It is difficult to put into words what was so disappointing about this story, though. Willis and Clark’s script is funny where it needs to be and smart when it wants, but the story is artificial and at times directionless. After the first act, it becomes clear that constructing a play around group therapy is lazy and a little cheap: you don’t have to be brilliant with character and language to create drama and comedy when you throw seven absurd and emotionally unstable characters onto a stage together. Much of the conflict of the play comes down to clashing personalities, rather than anything actually narrative-oriented.

And of course, with a play so obviously about gender dynamics–seven male patients with one female doctor–one is left to wonder if the world needs yet another play about the particular things men worry about as they get older. The most obnoxiously male character, Nick (played stunningly by James DeVita) ends up upstaging the competent and relatable therapist Michelle as the protagonist, despite being pompous and entirely unlikeable to the very end. This play is fairly enjoyable, but as a piece about character, psychology, and gender, it has all the grace and emotional dexterity of a falling anvil. Such are the fruits of gender discourse when it is helmed by men.

That said, the cast is a true strongpoint of this production. Potter is an extraordinary presence on stage, deftly showing the delicate balance between maintaining boundaries with psychiatric clients and connecting with them. Her vulnerability is palpable, yet her unflappable confidence is laudable. The cast is rife with equally admirable performances. Bob Williams brings forth the only other truly relatable character. Yet for those who have worked in mental health, James Lapan brings a very familiar and real character in the form of Richard, an affable yet shrewd gentleman with a barely functioning notion of personal boundaries. Charles Leggett and James DeVita also shine in their roles of family men in varying forms of distress. This cast has excellent chemistry together, interacting seamlessly in the unscripted parts. They’re a group who has put the work in, and it shows.

The direction (by John Lang) is solid, too. The show has a natural-feeling rhythm to it, and the theater-in-the-round space is used quite well and is a natural setting for the group-therapy content of the play. The set (by Jennifer Zeyl) has only what is necessary for the story–some chairs, a desk, a few office odds and ends–which is refreshing, and is cleverly used to depict various settings throughout. The costumes worn by the actors (by Deborah Trout) exhibit clever and subtle choices that wonderfully depict each character’s traits.

The various pieces of Seven Ways to Get There are in themselves smart, skilled, and enjoyable, and for that reason it may be worth paying high ticket prices for. Yet the gestalt, the broader story, is clumsy and aimless and delivers nothing worldview changing.

Bryan Willis’ and Dwayne Clark’s Seven Ways to Get There, directed by John Langs, will run from February 24 to March 15 at ACT Theatre (700 Union St, Seattle). For tickets call 206-292-7676 or visit www.acttheatre.org