Nine and The Long Road 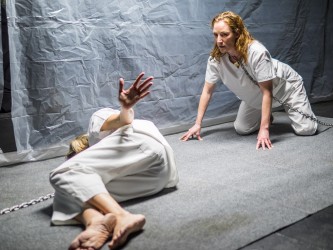 Two one act plays, Nine by Jane Shepart and The Long Road by Shelagh Stephenson opened Friday at Eclectic Theatre. Both assault your senses.

Two women chained to an empty stage, harsh fluorescent lighting, and ominous music set the tone for Nine. Colleen Carey and Cynthia Geary draw each other out, in stark white scrubs, leashed to the floor like dogs. Reciting lines from proverbs, testing or helping each other, not quite sure. Are they helping each other or playing mind games? A tit for tat game of trading information like currency.

Moonbeams and a stitch in time, the reoccurring lines that form a love/hate or hate to love relationship between the two nameless women. They only have each other but continue to punish one another. The moonbeam and its color becoming an obsession to woman number one, while woman number two withholds the information the other woman so desires. Exhorting the little control she still has left in her life, woman number two suffers her own agony by not being able to recall the ending of the phrase a stitch in time saves…

The music is a soundtrack for a sci-fi, a thriller, or possibly a horror movie, either way it will give you the chills. The women shouting obscenities at each other, then calming and comforting one another, engender the emotions that one assumes one would feel as a captive person.

This play leaves you raw, as you run the gamut of emotions along with these two women, one could feel the audience sigh in relief when they were unshackled from the stage. 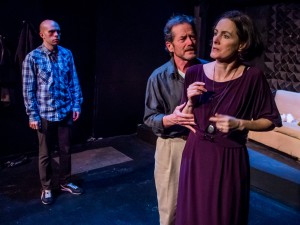 The Long Road, expressed the road well-traveled by those who have suffered grief and loss. Mary, a grief stricken mother played by Eleanor Moseley, has palpable pain. After the murder of her son Dan, Mary is trying to wade through the waters of life and to overcome her loss. There is a desire for closure, but one asks the questions: Is it really necessary for Mary to move on?

Emma, a troubled girl played by Abigail Grimstad, screams for attention from anyone, whether positive or negative. Her troubled youth lead her to a life of drugs and drinking. One night her anger and addiction took over and she murdered Dan- over a trivial amount of money. A senseless loss that Emma seems indifferent to, she blames her childhood for her current actions, taking no acceptance for the crime. The need for control of our lives comes through strongly with Mary’s journey on the long road to forgiving Emma.

Emma’s rough exterior is for her own protection. Watching her tell stories about her Nan, you see a little girl who’s lost in a big world, with no guidance about what is right and wrong. When she is screaming out profanities, while ushering away people, trying to help her; you can’t help but feel, Emma is getting what she deserves.

Joe, Mary’s other son and John, her husband, (Jared Holloway-Thomas and John Murray respectively), are dealing with grief on their own. A running obsessions and avoidance seem to be working for John. Joe, the solemn young man who wavers between blaming himself and trying to overcome his loss. Joe is a forgotten child while his parents search for their own relief. When Mary gets the idea to visit Emma in prison the family is up in arms.
The desire to understand what happened drives Mary to get the answers she needs.

The emotions of loss, the need for answers, and ultimately forgiveness transcend all boundaries between murderer and victim. The way both Emma and Mary come to terms with the murder of Dan show how capable people are of adapting and overcoming tragedies. The actors pull you in to this emotional performance.