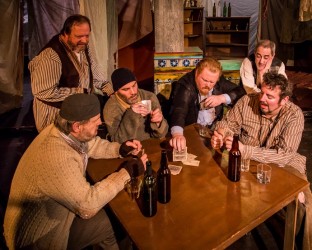 Down and Out in Nizhny Novgorod

The most famous play by Maxim Gorky, The Lower Depths,  was produced by Theatre Machine,  in the most appropriate theatre space in Seattle-the old immigration jail, now called theLab@INScape.  Used for Kafka’s The Trial, it has a sordid, sinister creepiness about it, making it highly suitable for a play about the lumpen-proletariat  of pre-Revolutionary Russia.

Written in 1901, it grapples with all the themes found in 19th Century Russian literature: alcoholism, poverty, tuberculosis, existential questions about life, faith vs. atheism, individualism vs. collectivism, despair vs redemption- are all expressed, in extremely poetic language. (even in an English translation)

A political activist as well as an important literary figure, Maxim Gorky, (1868-1936)  unlike Dostoevsky or Tolstoy,  lived to see the Bolshevik Revolution succeed after being in and out of prison during Tsarist times.     Well-connected with all the literary and artistic figures of the era such as playwright/short story writer Anton Chekov and actor/director Constantine Stanislavski, Gorky was also a friend of Vladimir Lenin.

Initially a supporter of the Social Democrats, eventually he supported the Bolsheviks (Communists).  Predictably, after the Bolshevik Revolution in 1917, he became disillusioned with the press censorship and voluntarily went into exile.   Dubbed a “Soviet Realist” because of his subject matter, Stalin personally invited him back to the Soviet Union in 1932, but it is suspected had him secretly assassinated in 1936.

Gorky’s  first big success, The Lower Depths, opened at the Moscow Arts Theatre on December 18, 1902, with Stanislavski directing and starring.  It was inspired by the residents of the Bugrov homeless shelter in Nizhny Novgorod, a city on the great Russian river, the Volga.   The literal translation of the title means “at the bottom.” The material for this play may have come from Gorky’s 5-year journey around Russia from the age of 11 to 16.

Inhabiting the overcrowded shelter are sixteen characters representing a cross section of the lumpen-proletariat.  Some were born into that class such as the thief Waska, one is an ex-convict, one is a prostitute, one was born a Baron, but embezzled money as a civil servant.  There is also an alcoholic actor, an out-of-work cobbler with a consumptive wife and various other seemingly marginalized people, poetically discussing the vicissitudes of life, in between bouts of drinking,  gambling and brawling.   Except for the landlord’s sister-in-law, the inmates are all incredibly cruel to one another.

In comes Luka, played by Bill Badgley, a Pilgrim, one of those itinerant travelers who spend their lives traveling from one sacred Russian Orthodox shrine to another.   Luka is a soft-spoken pastoral type, who through universal kindness instills hope into all the residents.  Due to Luka’s influence, some people begin to change.   In the end, because of circumstances, just when some people begin to escape, fate takes over and the escapees end up being worse off than they were before

One of the difficulties of staging The Lower Depths, is that the are so many characters, all of whom are introduced through long existential conversations and monologues in the first act.   However, Melissa Fenwick, the director, interspersed this lofty dialogue with well-chosen original music, by Ryan Ricks, mostly of the Country and Western variety.

It fit right in and saved the show from what could have been an overly long exposition.  It is often said that music dispels violence more than anything, if so, Ms. Fenwick’s decision to add music made the depressing subject matter less so.

In terms of a cross-cultural equivalent, Country and Western, seemed the right choice, for an American production.  Russians revere their poets, and C & W is very poetic and these pieces were amusingly witty.  Russian folk and church music is mournful, like C & W which  speaks to marginalized people about their misery.

Although the play is not driven by the plot, when the action got going it was incredibly dramatic as a few sub-plots, two intersecting love triangles, an accidental murder, and an elopement, dramatically collided. Although the ending is tragic, through the example of Luka, the kind Pilgrim, the play ends with optimism and hope.

With a cast of superb cast of 16, it is difficult to know who to single out as giving outstanding performances; they were all outstanding but special commendation goes to- Bill Badgley as Luka, Cole Hornaday as Bubnoff, Mark Waldstein as The Actor, John Clark as Kostilioff the Landlord, Sam Hagen as Waska, and Brittany Cox as Natasha.

Both the decision to add music, as well as the original composition by percussionist Ryan Ricks accompanied by Stefan Hajek on the Acoustic Guitar and Doug Wagner on the Bass, lifted this production into the stratosphere.

Set Design by Kasia Rozanska complimented the oppressive basement type atmosphere of the INS jail.  Using simple set pieces like laundry hanging everywhere, Ms. Rozanska managed to give the illusion of an overcrowded space without making it difficult for the actors to move around.  The near absence of windows made it seem like there was no escape, the absence of light made it seem like, metaphorically, there was no enlightenment in the shelter. Just by looking at the set,  it was very easy to believe that people were spiritually suffering, dying of consumption and slowly committing suicide through alcoholic self-destruction.

Since there are only 40 seats, and it was sold-out on one of the stormiest nights in recent history, it would be good to book your seat now.  It isn’t often such an important play is produced here in Seattle with such tenderness.