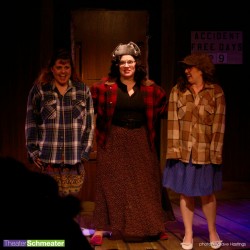 The “Girls” at Work  are Not What You Expect.

As a compliment, Oscar Wilde would not call The Secretaries, which opened at Theater Schmeater, “a well-made play”.   Although sometimes referred to as Surrealist,  I would call it Expressionist.  That is to say, it does not rely on realism, nor a structured plot, but rather creates a lot of extremely emotionally-charged images, as it ambles through the “initiation” period of a new secretary, in the all-female office of a lumbering company in rural Oregon.  Given the sometimes Frieda Kahlo-ish feminist images, it needed delicate direction and a superb cast to keep the audience in their seats.  Director Julia Griffin did a superb job of navigating the cast headed by Lisa Viertel, Megan Ahiers and Ashley Flannegan towards a coherent message about group think (of the female variety)

Expressionism as an intellectual movement sprung up in the early 20th century, initially in painting, to depict subjective emotions and responses rather than to describe objective reality.  In theatre it is characterized by heightened intensity, as well as speaking choruses, to create intense emotion in the audience.  This particular production drew on both the forms of Expressionist theatre and the principles of Expressionist paintings; there were some extreme images used to heighten reality and create very intense emotions in the audience.

In many other theatres, this may have been a problem for the audience, however, at Theater Schmeater, audience participation is not only tolerated but encouraged.   By expressing our emotional shock, the audience released the intense emotion, thus allowing us to ponder the metaphoric meaning of these decidedly un-pretty images.

The loose plot revolves around  the social dynamics the newbie encounters; the hazing, how she changes the pecking order in the office, the sexual overtones and undertones used to navigate power dynamics even among the heterosexuals.  In addition, the nasty side of peer pressure and the allure of joining a group at any price is explored.   The “girls in the office and their boss” are a feminist cult, not unlike Charles Manson, James Jones or the cult in Dostoevsky’s The Possessed.

Written by a group of feminist calling themselves, the Five Lesbian Brothers,  the secretaries and their boss, through a series of scenes, not unlike a TV series demonstrate female bonding.  They talk about dieting, clothes, menstruation, courtship, sibling-style rivalry among the employees as well as lesbian tendencies in the friendships.  Slowly but surely, the new secretary’s  morals  are worn-down and she becomes initiated into the cult from which there is no return.

Given that his play does not rely on realism, because of the way it is staged, I never thought, “oh this isn’t realistic” because the stylized acting, the leitmotif of excessively high-pitched giggling in chorus by the secretaries, set the audience straight from the beginning, that the given circumstances of the play were not constrained by realism.

Ashley Banker as Patty Johnson,  the new kid in the typing pool, was well-cast as an innocent girl right out of the ‘50’s who biggest aspiration is to be a good secretary and her evolution from sweet innocent to bad girl is compelling.  Lisa Viertel as  Susan Curtis  the manipulative frightening boss from hell, certainly made my blood curdle with fright.  Megan Ahiers, as Ashley,  the previously favored secretary was funny and creepy all at the same time .   The numerous set changes worked well with a set designed by Robin Macartney.

Surprisingly, I found this show fascinating.  The violence was neither gratuitous nor random; and mostly took place off-stage.  It wasn’t just a feminist rant, but spoke universal truths about peer bonding, the social/sexual dynamics of the work place and groups in general, and in its own bizarre way, was grotesquely amusing.