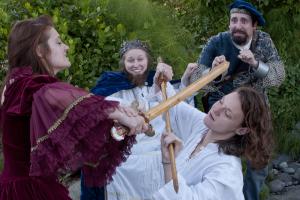 Backyard Bard’s production of their abridged version of Shakespeare’s All’s Well that Ends Well provided an energetic showcase for the four actors who played all the parts. Director Marc “Mok” Moser, however, should have kept a scene that made the ending intelligible.

The Synopsis: Helena, the daughter of a doctor is in love with the noble Bertram, who is not interested. Helena’s dead father has left her with a medicine that might possibly cure the King. She bargains with the King: if this remedy works she can have the pick of any man in the realm; if it fails, she dies. It works—she picks Bertram, who is still not interested.

Shakespeare sometimes sets up the dramatic tension by having a conditional promise or a prophecy. Macbeth can “Fear not, till Birnam wood Do come to Dunsinane”; Julius Caesar is warned to “beware of the Ides of March,” and in this case, Bertram says Helena will only be his wife when she has a ring from him and is pregnant with his child.

Though Shakespeare has Helena espouse the very modern philosophy

Our remedies oft in ourselves do lie (psychology),
Which we ascribe to heaven (astrology),

the play itself is Venus in opposition to Mars. The Venus theme is the plot turns driven by Helena’s love for Bertram. The Mars theme is shown by the lust of Bertram and Parolles for the thrill of war. Another bit of fun: it’s the man who is “given” to the woman for marriage, rather than the other way around.

The players—Ty Bonneville as Helena, Helen Roundhill as Parolles & Diana, Anna Richardson as the Countess (mother of Bertram), King, and Widow; and Chris Martinez as Bertram and Lafeu—were a little hammy. The various scenes and character changes were handled via changes in costume. There were a few props and no set, unless you count the shower curtain they hid behind to change clothes and a large chest as one.

Back to the plot: Bertram goes off to war and falls for Diana. Naturally, Helena has pursued Bertram, so she and Diana meet. They discuss Bertram and launch a plot. This abridged version is missing a crucial scene: Diana promises to offer herself to Bertram in her bedroom at midnight. Secretly, Diana has agreed to let Helena take her place for the tryst and hands off to Helena the ring that Bertram had given her.

Months later and back in Paris, in front of the King, Bertram accepts it must have been Helena in that bed because she has the right ring and is pregnant.

This limited budget production has not solved a prime technical challenge: sound. There are no walls or ceiling in the park and they did not have any amplification. It didn’t help that at least 16 planes flew overhead during this performance. If you want to hear, sit close.

If you haven’t attended a play in the park before, here are some tips. Arrive with plenty of time to select a space to spread out a groundcloth. Bring low profile lawn, fishing, or camping chairs, water or beverage, layers to add as the temperature falls, and snacks. Also bug repellent if you feel the need.