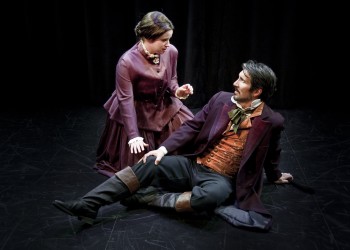 When a much-beloved story is adapted from a book to a script, there is inevitably a concern that the adaption will not honor the integrity of the story. When I first heard that Taproot Theatre was going to perform Jane Eyre: The Musical, I was skeptical about how the Dickensian era story with gothic undertones would translate on stage. Upon attending the opening night production, however, I realize now that I had nothing to be worried about.

Jane Eyre is a story that details the life of Jane who was orphaned at a young age and forced to live with unloving extended family members. Eventually sent away to a boarding school, Jane meets a fellow student who instills in her the importance of grace and forgiveness and the love of God— values that we see Jane cling onto in the most complicated instances of moral dilemmas where she is forced to choose between her own happiness and doing what she knows to be right. Jane leaves the boarding school to be a governess for a young girl named Adele. After getting to know the young girl’s father, Rochester, Jane eventually falls in love with him. The musical is a complicated love story of two wounded souls in complicated and tragic circumstances. Without giving the ending away, I will just promise you that you will not be disappointed.

The production was an elegant experience that utilized subtle directorial choices to create a Dickensian ambience. The setting, a building that seemed to be built in the 1800s, mainly served as Thornfield, Rochester’s home. The top level of the house was where the live musicians played, behind the upstairs window panes so that you could hardly see them. The music was beautiful (Deborah Armtrong on piano, Deanna Sarkar on violin, Dexter Stevens on woodwinds) and certainly made me wish I could always have them following me around, playing music as my life’s own personal soundtrack.

Art Anderson as Edward Fairfax Rochester was impeccable; he balanced the dark, tortured side of Rochester well with the lighthearted, charming side. He had a lovely speaking voice and a lovely singing voice. Rochester’s character is lovable: he falls in love with Jane Eyre’s spirit and wit and sees her as his equal.

Jessica Spencer also did a wonderful job at embodying Jane Eyre’s spirit: a strong character who has every right to have a martyr-like complex, but instead chooses to be humble and respectful, but also strong and smart. She certainly maintains the fiery sass we see that she was full of as a child; her child version was played by Abi Brittle who was remarkably charming and had excellent timing.

Aside from the two leads, Spencer and Anderson, two of the most stand-out performances for me were Pam Nolte, who played a hilarious Mrs. Fairfax that had the audience rolling, and Melissa Maricich, who played Helen Burns. Maricich sang with such a sweet voice that made me want to listen to her voice forever.

Aside from the actual production, the beauty of the scriptwriting cannot go unnoticed. I found myself constantly scrawling down bits and pieces of dialogue and lyrics that I found to be inspiring. The script was written by John Caird and the music and lyrics by Paul Gordon. Karen Lund did a phenomenal job directing this production, and utilized interesting blocking throughout the piece which added to the elegance of the show.

The show is certainly a long production— running almost 3 hours with an intermission— so it is not for theatergoers who tend to get antsy after sitting for long periods of time. I can assure you, though, that I was engaged the entire time and never found my mind wandering elsewhere. The production is well-paced, though it strays from the original story in a few small ways, such as in sequence of events of a subplot when Jane meets a missionary man who wants her to marry him even though neither of them have romantic regards for one another.

Treat yourself to tickets to go see his beautiful production. I can guarantee you will not regret it.