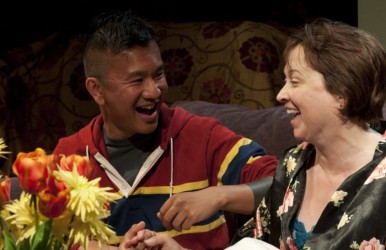 A Small Fire, by Canadian-born playwright Adam Bock, produced by Seattle’s Sound Theatre Company, at the challenging New City Theatre Space, opened this past weekend to sold-out audiences.  The production itself was a testament to the outstanding talents of the actors, the director, Julie Beckman and especially the set designer, Montana Tippet, because the play itself was not up to the same standards as the production.

A four-person play, whose main character, Emily Bridges played by Teri Lazzara, is straight out of a self-help book on narcissistic, judgmental, controlling spouses/parents/in-laws/bosses from hell.  Needless to say her husband, John, played by Gordon Carpenter, is a placater.  Both are emotionally repressed individuals and hide their emotional and dead spiritual lives behind these façades. An accidental event, Emily loosing her senses of smell, hearing and sight, create external development in the characters but little internal development.

As a result the play is not a tragedy, where the difficulties are caused by the hero’s character flaws but by an accident.  It is in fact a melodrama, where external accidental events cause the difficulties. The playwright sets up some given circumstances, but instead of finding the problem inherent in those circumstances to resolve; which are the inner dynamics of the couple and indeed the inner conflicts of each individual, he just keeps repeating the situation and has a deus ex machine ending to resolve their relationship which did not resolve anything.  There is a loose plot involving the planning of a daughter’s wedding, which provides a backdrop for the loss of Emily’s faculties.

Two minor characters demonstrated character development but had little stage time.   A gay construction foreman who manages Emily’s construction business, Billy Fontaine played by Ray Tagavilla seems to be the only person with whom Emily has an honest relationship.   Tagavilla  delivered a brilliant monologue about the HIV death of his lover, recounting  the love and support the generally abusive Emily showed to him.  It was the high point of the evening.

The daughter Jenny, played by Sara Coates, was the only person in the family able to fully understand and articulate her emotions and resolve them.  Why would a woman fully aware that her mother is verbally, emotionally abusive and has no boundaries, ever plan a wedding with her? Why did  Jenny never considered the “Vegas Solution?” as so many brides have, with mothers from hell.  Although Sara Coates did not have much stage-time, her performance was honest and from the heart as she tries to “rescue” her father from his chosen fate.

The New City space is challenging even for a one person/one set show; however Montanna Tippet’s creative use of space and the quick set changes were highly commendable.   The sound and lighting by Lindsay Smith added a lot of texture and depth to the evening and the direction by Julie Beckman made this less than appealing play fairly watchable.