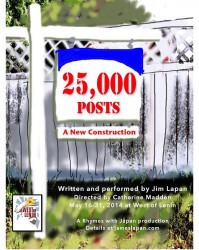 “Life was happening to me at an alarming rate and it was not of my making!”

Was among the numerous witty and profound lines that made me laugh and cry,  at the same time, as I sat through 25,000 Post-A New Construction at West of Lenin, an outstanding solo performance by veteran actor Jim Lapan.  Since he also wrote the script, which was a seamless combination of the highs and lows of life in general and specifically as an actor/homeowner, during the recent housing crisis, I would also describe the evening as a discovery of one of the best writers of the 21st century.

Using his “day” job to create a focus around which to recount his life since finishing a coveted M.F.A from the UW, he wove several threads together.  They were: the courtship of his first wife named “Bette Davis eyes”,  falling in love with Seattle,  following the progress of the Mariners (described as “as close as I get to organized religion”), the difficulties of juggling day jobs and professional work as an actor, divorce, juggling post-divorce dating and fatherhood, and loosing his house during the housing debacle.

All of this is recounted as he goes about his job as an installer of “House for Sale” signs for real estate agents.  So, although he lost his house during the housing crisis, his hours at work increased as so many families tried to sell their houses.  This “day” job also allowed him to witness the tragedy of the housing crisis from a unique perspective, and lucidly describe it.

One of the prominent questions Lapan wrestles with is the American obsession with success and how we define it.  For actors, definitions of People Magazine success plague them; but in the end Lapan realizes that success in life is far different.  Lapan  makes the point that it is not what happens to you, but how you deal with it, and that sometimes just staying afloat while continuing to “follow your dream” and create something is success.

As an actor/writer/person Lapan was extremely generous, he shared his vulnerabilities with the audience, which engaged us for the full 90 minutes.  His energy never lagged, he was right on the money the whole time and this solo show is clearly going places.

Imitating the truck Lapan used to transport his signs and equipment, the simple set designed by Doug Lidz was extremely interesting and set the tone of the evening.  Cleverly, it solved one of the major difficulties of any solo production-how to get the actor to move around stage in a manner that looks realistic.    The sound design, by Michael Owcharuk, was highly amusing, because they were the sounds of power tools, as Lapan mimed putting up signs.    One person shows are notoriously difficult to direct and Catherine Madden, directed the show expertly.   I sat in the worst possible seat and missed nothing.

As a reviewer, I always try to find one great line to use as the title for myreview; there were so many in this play it was difficult to choose.   In a few years time Lapan will probably be quoted as much as Dr. Jonson or Socrates; he’s that good.  Get you tickets now!!!!