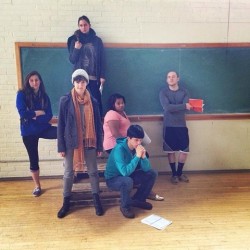 Dog Sees God opened at the Hutchinson Theatre this weekend, put on by the Undergraduate Theatre Society at the University of Washington. Dog Sees God is an entertaining piece about a high school student by the name of CB, whose dog dies at the beginning of the play, prompting him to begin to ask questions about the afterlife, and eventually questions about sexuality. The play, by Bert V. Royal, is a reimagining of the Peanuts characters and how Royal imagines the people they might be in high school. Though the play seems to be promoted as a play questioning issues of the afterlife, it seemed to be much more focused on questions of sexuality. I expected to walk out of the theatre thinking about different philosophies concerning the afterlife, but instead walked out of the theatre feeling heartbroken that there are LGBT students that face physical and verbal bullying everyday when they go to school.

Dog Sees God felt like a non-musical version of Spring Awakening, or perhaps a non-musical, non-sexist version of Grease: pouring alcohol into milk cartons in the cafeteria, having a party when someone’s parents are out of town, having a stoner best friend always smoking something or another. The hilarious cast had me laughing loudly at several parts, particularly at CB’s sister, played by Alexandra Feinberg. From the moment she walked on stage in a gothic outfit with a coffin-shaped purse, the audience knew she would be cracking us up whenever she was on stage— her confident and quirky stage presence was very refreshing.

While the cast was made up of likable actors and actresses, Cameron Duckett’s portrayal of CB and Michael Monicatti’s portrayal of Beethoven particularly stood out to me as the strongest performances. Duckett had a charming stage presence that had the audience rooting for him from the first scene. His character was distinctly different from his friends, in that while his friends are getting drunk in the cafeteria, he is questioning issues of the afterlife, religion, and social norms concerning sexuality. The other performance that particularly stuck out to me where Sean Payne’s portrayal of Matt (or Linus, as it were). He was eerily believable and fascinating to watch. His stage presence was bold and captivating.

The pacing of Beethoven’s character development was excellent: seeing the tip of the iceberg of the bullying and harassment he has faced, wondering where he goes to at lunch, seeing him play the piano as an escape, learning that he used to be friends with the other kids, learning what his dad did and why that ostracized Beethoven from the other kids. It was rhythmic and heartbreaking as it unfolded. Monicatti did a phenomenal job representing such a complex, confused, hurt character. He was bitter and wounded, but brave and quietly full of desire for a fresh start. The most poignant scene, a moment in the music room when he threw a folder of sheet music across the room at CB, sent a chill up my spine. It was incredibly powerful,  as was the scene where Beethoven is excruciatingly beaten up by a homophobic bully. When CB initially speaks with Beethoven in the music room, he asks CB about whether he believes in an afterlife. Beethoven replies, “There has got to be some reward for living through all of this.” This was perhaps the most telling line of a play dealing with thoughts of death, the afterlife, bullying and sexuality.

The soundtrack to the play added a fun element. When the audience enters the theatre, they find the protagonist, CB, sitting in his backyard furiously writing a letter to a pen pal he used to write to as a child. The soundtrack of the play had an outdoor white noise track, where you heard air movement, rustling branches, an occasional airplane overhead. I had to put my coat on because I felt likeI was actually being chilled by a cool, crisp air. The set was simple but effective, taking place mainly in a backyard, a cafeteria, a music room, and a living room.

There did seem to be blocking issues that need to be addressed, though. There were certain points of the play where one side the audience was laughing because they caught a facial expression or subtle body movement that the other side of the audience missed. And vice versa. Maybe this is the price of live theatre— that not everybody gets to experience the play in the same way— but it seems like the blocking could have been more strategic.

I applaud the cast of Dog Sees God for putting on a great show that wrestles with important questions in an entertaining and emotional format. 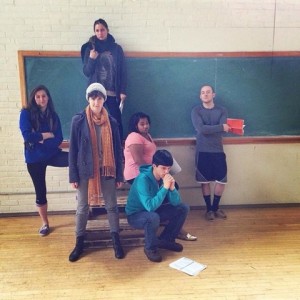