Life is a Dream Brings Spanish Golden Age to Ballard 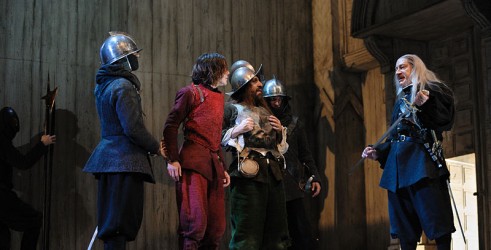 Ballard’s Ghost Light Originals offers up a provocative night of entertainment with its revision of Calderon de la Barca’s Life is a Dream, written during Spain’s Golden Age of Theatre in 1635. After a somewhat slow exposition, the play settles in to provide a multi-faceted story that explores the tensions between love and duty, the burdens of meeting one’s fate and the mystery of  mankind’s perceptions of reality.

Cornish College graduate Caitlin Gilman ably handled the revision of the original script, setting the work in a dystopian future.  Gilman wanted to create a world in which “you could carry a sword and guard a virtual reality chamber.”

Robert Hankins assumes the role of Segismundo, who is  imprisoned in a tower by his frightened father so that his son won’t fulfill a dire prophecy that has him bringing destruction to his empire.  Hankins’ opening monologue describes the austere world in which he lives in lonely abandonment.   His part is nearly Shakespearian in scope as his character struggles with alienation, seething bouts of rage and a broken heart.  Segismundo also must determine what is his real world and what is merely a “strange and lovely dream.”  Hankins is more than up to the task and provides a solid, thoughtful performance throughout.

Greg Brisendine and David Klein are both very effective portraying the older men of the land, while Lindsay W. Evans offers an impassioned, high energy take on the role of Rosaura, a young rebellious mistress and the love interest of the piece.  Gail Hebert has fun portraying Rosaura’s wiser and older companion, who revels in “the joy of complaining.”

The Ballard Underground is hardly an ideal venue for classic theatre, but the cast and crew, under director Roy Arauz, make the most of what they have here in this somewhat cramped space.  I particularly enjoyed scenic designer Brandon Estrella’s clever use of boxes, easily manipulated to create a variety of the sets the script called for.  Ghost Light Theatricals makes it quite worthwhile to take up Sigismundo’s offer “to dream a dream with you.”

Life Is A Dream runs through May 10 at the Ballard Underground at 2220 NW Market Street.   For ticket information go to www.ghostlighttheatrical.org