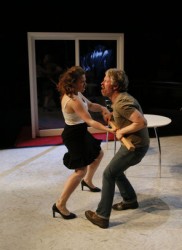 Laura Marks’ Bethany is quick, brutally relevant, and well-crafted—if a bit unpolished. Set in modern-day suburbia, it portrays the Streetcar-like tale of a middle-class woman fighting with every weapon at her disposal to maintain composure and sanity as piece by piece her life is stripped from her.

Car sales associate Crystal (Emily Chisholm) is a single mother who was recently made homeless and whose daughter, Bethany, was taken from her by child services. She makes the resourceful decision to squat in a foreclosed home, and finds it already occupied by a grizzled man named Gary (Darragh Kennan). Meanwhile, Crystal desperately attempts to close a deal at the dealership with Charlie (Richard Ziman) who, more and more appears not to be what he first seemed. What makes Bethany so captivating is not the originality of the story, but the boiling, percolating tension that arises between Crystal’s dire situation and her constant need to sell with a smiling, bouncing countenance. The accumulation of lies, of sacrifices, of self-betrayals that Crystal commits are viscerally painful and often direly comprehensible.

The production is impeccably cast, from Chisholm, who somehow reveals Crystal’s accumulating devastation through the song-and-dance of the sales-pitch, to Cynthia Jones as Toni the kindly and professional child-services agent. Jonelle Jordan, with apparent relish, lends life and character to Shannon, the coworker-you-love-to-hate. Richard Ziman’s Charlie, a would-be motivational speaker, comes with all the middle-class, patriarchal slime needed to make a loathsome suburban antagonist, but with winks of the real sadness that accompanies failure of a middle-aged guy to meet the economic standards of our culture. Kennan, whom I was fortunate enough to see as Sherlock Holmes in Seattle Repertory’s Hound of the Baskervilles, was almost unrecognizable as the Gary the homeless anarchist. His spritely, playful, and at times woefully serious performance was mesmerizing.

ACT’s theater-in-the-round set-up is well-suited to the story of Bethany, in that it gives a particular sense that the audience is eavesdropping, witnessing private moments behind the veil that we really shouldn’t be seeing. The direction (John Langs) is effective, if a bit heavy-handed. I’m greatly admiring of any production in which one set (Carey Wong), with minimal changes, is used to represent multiple locations, and Lang accomplishes this very well; the house quite seamlessly becomes a Saturn Dealership with just a change of lighting (Andrew D. Smith). Transitions are smooth and the story is told with breath-taking pace and ease. However, there seems to be a trend in modern directors that dictates that very dramatic plays require aggressively loud action-movie music in scene transitions, and as heart-racing as these sequences are, I can’t help but think I’m being manipulated a bit to feel more suspense than I otherwise would. Still, if you’re a sucker for that kind of thing—as I tend to be—then it won’t bother you.

As mentioned before, the lighting is terrifically subtle and effective in Bethany, and the sounds are as well. The one significant problem is that it felt a little under-rehearsed. There were moments in which the timing was clunky, and there is a fight scene that looks about as organic as fast-food. But these moments are not many, and they are certainly far-between. Overall, Bethany is a heart-gripping story that any woman, or indeed anyone who has been in the job or housing market in recent years can connect with.