Seattle Takes the Spotlight in Book-Its’ Truth Like the Sun 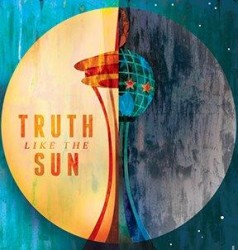 Rarely has a setting played such an important role in a novel or play as Seattle does in Book-It’s Truth Like the Sun.   The crazy quilt ingredients of our town, “with such a short history it is all future,” form the maze through which all of the play’s characters must traverse.  For here Seattle is polite and smug, innocent and sexy, insecure and brash.

During the course of his novel, author Jim Lynch shuttled back and forth between 1962, the year of the World’s Fair, and 2001.  The play does a marvelous job shifting times and settings.  The perfect costumes, well chosen background slides and apt musical pieces and dancing help the two distinct eras take shape. It is quite bracing to see what has become of our remote Northwest outpost.

Chris Ensweiler, recently so charming as the befuddled, humble title character in Taproot’s Mr. Pim Passes By, skillfully does a 180 here and plays Roger Morgan, the power behind much of the World’s Fair and its iconic Space Needle.  The work makes delightful use of the historical fiction genre, as the fictitious Morgan deals with the very real celebrities, crime and economic and political concerns of that era.  After all, the Fair took place during the coldest days of the Cold War where Khrushchev, Sputnik and the Bay of Pigs constantly threatened to push the big celebration off the front pages of the Post-Intelligencer.

Jennifer Lee Taylor plays a young, hard-nosed reporter for the seriously ailing P.I. of 2001. She is determined to unearth some of the baffling, somewhat shady history of this “freakishly scenic place.”  In doing so, she must confront Morgan, who in his 70’s decides to run for mayor.  The two constitute the major conflict of the piece, but it is really Seattle that steals the show, complete with strip joints, card rooms, cops on the take, baffling disappearances, Boeing, Starbucks and Rainier beer.

The fascinating Book-It style, in which the characters share the narration when not reciting dialogue, fits this work to a tee.  The large opening crowd scenes are able to capture the hubbub and giddy enthusiasm of the Fair, which as Lynch has noted, served as a coming-out party for our young ambitious city.  Kevin McKeon adapted the novel for the stage and also takes on the role of Morgan’s embittered right-hand man.  Emily Fortuna, Laura Hanson and Leslie Wisdom play the important women in Roger Morgan’s life.

It is great fun to watch Morgan’s mysterious secrets and Seattle’s quirky history simultaneously unfold themselves all right in the shadow of our very own goofy Space Needle.

Truth Like the Sun runs through May 18 at the Book-It Repertory Theatre in the Center Theatre at the Armory, 305 Harrison Street.  Jane Jones and Kevin McKeon conceived the work. It is directed by Jane Jones. Scenic design is by Catherine Cornell, Lighting by Marnie Cummings, Costumes by Pete Rush, Sound by Nathan Wade.  Ticket information at the box office: 206-216-0833 or www.Book-It.Org.