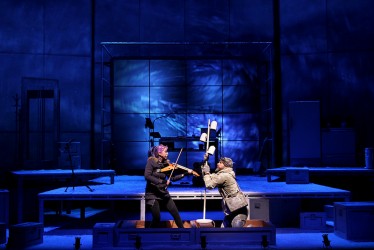 SO much talent onstage, and yet I couldn’t stop thinking about how next door they were doing Who’s Afraid of Virginia Woolf?

Ernest Shackleton Loves Me is a story about a single mother who is so tired that she has a hallucination in which Ernest Shackleton, turn-of-the-century Antarctic Explorer, whisks her away on his famous adventure. Like you do.

Kat (Valerie Vigoda) is a frustrated music composer who just lost a contract, and she  is so unimaginably poor that she has to keep her MacBook in a spacious Brooklyn apartment. She hasn’t slept in thirty six hours because her dead-beat baby-daddy ran off to join a Journey cover-band and sometimes her baby cries. All of a sudden, Ernest Shackleton (Wake McCollum) calls her on the phone, falls in love with her, and they end up Skyping (but only after Kat has looked him up on Wikipedia). They then proceed on Shackleton’s great Antarctic voyage, full of deadly sub-zero temperatures, horrendous personal sacrifices, and  insurmountable voyages across barren ice deserts and storm-tossed seas. Can you see how there is an appropriate comparison between Shackleton’s voyage and Kat’s life? No? But she lives in Brooklyn!

Look, this show is really fun. The songs are horrifically catchy—I was humming a couple of them well into the morning-after. And Both Vigoda and McCollum are impeccable performers. They are great singers, athletic movers, lively actors, and both capable of simultaneously singing and playing fast-paced duets on the violin and banjo respectively. Equally impressive is the score and music production (Brendan Milburn). This show is a bit like Cirque de Soleil, in that you are aware that you are watching a magnificent feat happening before you, but for the life of you, you can’t think what the point is.

Yes, it’s a metaphor that teaches us that we must never give up, even when things seem impossible. But somehow, this production manages to belittle both the struggles of Shackleton’s crew—a band of true historical heroes—and single mothers everywhere. Joe DiPietro’s book is so full of trite, winking, opportunistic jokes that my eyes nearly rolled out of my skull.

Still, it is fun. The songs are great, and both Vigoda and McCollum are immensely enjoyable to watch. I only hope both they and Milburn are able to find projects more worthy of their massive talents, in the future.

Balagan Theatre presents Ernest Shackleton Loves Me was directed by Jake Groshong, with book by Joe DiPietro, music by Brendan Milburn, and lyrics by Valerie Vigoda. It will run from April 18 to May 3 at Seattle Repertory Theatre (155 Mercer St, Seattle, WA 98109). For tickets, visit BalaganTheatre.org or call (206) 329 1050