In the Book of … Will Sweep You Away 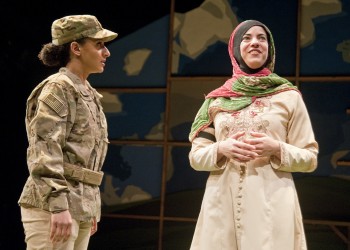 In the Book of … directed with a sure hand by Scott Nolte, had its regional premiere on Friday, March 28 at the Taproot Theatre in the Greenwood neighborhood. This is a first-rate production all around, and it helped that John Walch has written a play that is at times witty, touching, sad, and realistic.

The trajectory of the story roughly follows that of the Hebrew Book of Ruth. In both stories, the widow Naomi returns home after a long absence. She brings another widow struggling to regain hope.

Opening scene: A black female in Army fatigues (Strickland) is marrying white Eddie (Matt Shimkus). When Shimkus raises a toast and quotes Pat Benatar’s Love is a Battlefield, to the groans of the wedding party, this alerts us to the playwright’s ear for puns and metaphor.

Gail, delightfully played by Pam Nolte—Taproot veteran and busy professional actor—wants to be a force to be reckoned with. As the matriarch of the family, Gail takes a lot of stands. When she suspects Mexican immigrants working at McDonald’s have switched to Spanish to make fun of her, she pitches a fit. Brandishing a broom, she is surprised at the applause she hears at the end of her tantrum. Thus is launched her campaign for mayor to “sweep the illegals out” of her town and her country. This reminds one of Lester Maddox brandishing an axe handle against black sit-in protesters at his Atlanta restaurant in 1964. Maddox parlayed his notoriety into the Governor’s office.

Eventually Gail teases out of Anisah that she does not have legal papers, and Gail is off and running. What trips her up is the connection that Anisah is able to find with Gail’s last son, Bo. One son died in Afghanistan, and Bo accidentally killed his brother. Post Traumatic Stress Disorder runs through this play like a virus.

Rounding out the super cast are Nolan Palmer as Bo Sr and Kevin Pitman as Bo. Opening Night the cast received a deserved standing ovation.

One choice in the play did not fit the care Anisah and Naomi took to hide her undocumented status: Anisah plotted an escape to Detroit’s Muslim community by taking a plane. Why would she walk straight into the hands of the Transportation Security Administration and Homeland Security?

Walch was commissioned to write In the Book of …  for the Alabama Shakespeare Festival and it premiered in 2012 in Montgomery—site of the famous Bus Boycott. It features exceptionally strong women who fight for their country, home towns, and the right to love and hope again after suffering enormous grief.