The Edge of Our Bodies 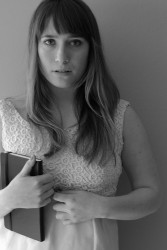 Adam Rapp’s The Edge of our Bodies, directed by Devin Bannon, is a curious one-woman story about a teenage girl’s lonely interactions with a sad and foreboding world, in the midst of a pregnancy that she does not want. Incorporating segments from Jean Genet’s The Maids, it discusses the masks a woman wears in response to the demands of a frightening culture that demands so much of her.

As is I think customary in one-person shows, the set (by Jenny Littlefield) is simple and comfortable. A handful of pieces of vintage furniture: something to sit on, something to lean on, a gorgeous old radio. The stage is beautifully wrought to look like that of an upstairs bedroom of an old house in New England, perhaps an attic. In the background, behind a sheer curtain, a window and door. Bernadette (Samie Spring Detzer) is an actress. She begins to tell the story by reading her diary.

In voice and manner, Detzer embodies her highly intelligent, decadently arrogant teenaged character improbably well. It takes considerable skill to present a teenager realistically without teetering into the realm of simple stereotypes. With an apparent generosity of spirit, she portrays the sometimes unsavory characters Bernie meets kindly, with originality and without, again, stereotype. She presents sometimes familiar voices without creating cartoons. She tells stories with pleasing rhythm, and does justice to everyone involved in their telling. In the Genet segments, Detzer positively transforms into a child’s portrayal of an imperious woman in such a stylized manner that the audience hears the past whispering to us that some parts of a woman’s experience are indelible through history. The set never changes, but Detzer treats it differently in each part of her story to such an extent that each place becomes as vivid as if it had been painted on the back wall.

This play’s strength is its softness and lightness of hand. This strength appears throughout in Devin Bannon’s directing, which exhibits such impressive restraint that it is hard to believe it is his directorial debut. As Bernie tells her story, small changes in lighting and sound effects (Tristan Roberson and James Schreck)—so subtle they almost go unnoticed—create immense shifts in mood, often steering the story from a relentlessly stark realist portrait of an unhappy child to a wafting, dreamscape that truly brings the audience to something like the edge of our bodies. Bannon and Detzer were more than up for the challenge of making a dynamic narrative out of what could possibly have been a long, intermission-free tale of teenage angst.

Now, everything in moderation. Understatement is a tool of savage strength, but there is always the risk of blurring the line between subtelty and banality. Rapp’s script contains many literary gemstones that sparkle with an often devastating familiarity, and it is often quite funny—in a grown-up way, and also in the way that teenagers like Bernadette are funny—but at times it feels that in order to reach these, you have to mine through a whole lot of thick, gritty dullness. There’s a lot of small-talk between characters in this play. There’s a lot of visual description. And these can and often do play important roles in a story, but there were several occasions in which I wished someone had written it down in short-story form, so I could quickly read it and let Detzer skip to the interesting parts.

That said, the interesting parts are really interesting. This is a story that asks us to examine what our culture expects of women, how men see them, how age plays a role in these interactions, and—most viscerally, to me—how can we really know when we are being ourselves? Do we ever lie in order to be truer to ourselves?

The Edge of Our Bodies fits well into our modern culture that embraces stark realism and a compelling female anti-hero. It’s wickedly smart and at times quite painful, and offers much to talk about over after-theater drinks.