Taproot’s “Mr. Pim Passes By” Makes for a Delightful Night at the Theater 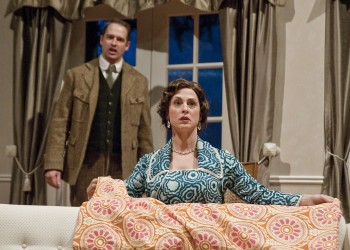 The plot involves a mild mannered and somewhat obsequious Mr. Pim, working on a minor business matter and thus visiting the English country home of George and Olivia Marden.  Pim’s innocent confusion of names and people opens up a dizzying maze of chaos that sweeps up not only the comfortably married husband and wife, but George’s niece and her artistic boyfriend as well.  The high-energy laughs and antics adorn some intriguing thematic explorations into the nature of morality, love and art as they intertwined in early 20th century English society.

Director Karen Lund has a wonderful handle on the play and evokes strong performances from her entire cast.  Chris Ensweler’s Mr. Pim echoes Milne’s naïve Winnie the Pooh, while a hilarious Ryan Childers in late Edwardian suits and puffing away on an enormous pipe, somehow seems to channel the manic Tigger, as he assumes the role of the befuddled man of the house, George.  Cornish graduate Allie Pratt is a charming ingénue, determined to have her stuffy uncle accept her beau. An earnest Daniel Stoltenberg plays the idealist boyfriend.

The show revolves around April Poland’s portrayal of the wise and socially adept Olivia.  It is this character’s task to aid the young lovers, clear up some serious misunderstandings and finally coach her conventional husband on how to romance a wife.  With a sparkling twinkle in her eyes, Poland achieves all this while simultaneously redecorating the somewhat bland morning room at Marden House.  Kim Morris rounds out the cast as the proper Lady Marden, quite concerned about any negative publicity that could affect the family name in society.

That so many of the concerns of this collection of characters still are important to us today, speaks to the quality of this play.  The Mint Theater in New York City unearthed this neglected work; it seems that Milne’s talents spread a good deal beyond Pooh Corner.

Marianna De Fazio did outstanding work as dialect coach; all the British accents sounded spot on to this ear.  Mark Lund designed the comfortable, one room set; The Taproot Company made sure we all had a marvelous time there.