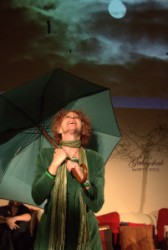 10 Days to Happiness is a not entirely irreverent, not entirely one-person show, written and performed by Donna Rae Davidson about her ten day meditation retreat at a Buddist center in the wilderness.   Each scene respresented the trials and tribulations of getting through just one day of 10 hour meditations, bland vegetarian food, and halo-wearing, serene-emanating poseurs.  To highlight the subtext, and her repressed reactions to the rigidity of the center, power point images were flashed on a screen above the stage, which were highly amusing.

Although the writing was rather good, with many insightful comments and spoofs on the true believers,   her performance was spotty.  Generally, Ms. Davidson did not have the necessary comic timing to render her text particularly funny.  In addition, she played it for laughs.  In comedy, if one does not play the inherent tragedy, the comedy falls flat.  Instead of being able to nail the humor, she relied on shouting and over-acting.

Lara Fox, Katherine Grant-Suttie and Angela Amos, the three ensemble players, delivered the best performances.  They played the different characters one finds lurking around meditation centers and were at their best when they were displaying their serenity publicly.

Throughout the show, there were a few songs thrown in ,which were the high point of the evening; however, there weren’t enough of them.   Parodies of Indian chants whose lyrics were written by Robert Jones and Ms. Davidson, performed by the Spirit of the Sound Choir, were HILARIOUS.