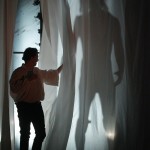 The Authentic Frankenstein Comes to Life at Book-It

Book-It Repertory’s Theatre new production, Frankenstein or modern Prometheus  is an adaptation of Mary Shelley’s 1819 novel of the same name.  The moral lesson is contained in the subtitle. In Greek mythology, Prometheus was the Titan, who created man from clay, and by giving them fire, enabled progress and civilization. For this, the gods punished him harshly.

Therefore, Prometheus represents human ambition, and the risk of overreaching or unintended consequences.  Like Prometheus, Victor Frankenstein, driven by intense ambition plays God and not only creates misery for his creation but punishes himself and all around him.

Written long before the atomic bomb or the invention of the internal combustion engine, the date of the publication of the novel is significant as it suggests the theme.  Victor Frankenstein’s disastrous misuse of science boomerangs to punish him and many other innocent people

In 1819, the first phase of the Industrial Revolution had run its course,  the scientific discoveries of the 18th century had found practical industrial application with the steam engine fueling the cloth manufacturing in the North of England.  However, the second phase, the revolution in transportation and communication due to the railroads and electricity was right around the corner.  By writing what seemed to be a Gothic romantic novel, Mary Shelley was actually writing a cautionary science-fiction novel.

The adaptation, like the novel, opens at the end of Victor Frankenstein’s life.  As a student he had experimented with science by infusing electricity into stolen corpses.  The result, as we all know, was an abnormally large monster, which we nowadays refer to as Frankenstein.   Referred to as “the Creature”, he becomes too human and as a result of his disappointments with his existence, torments Victor Frankenstein, for the rest of his life.

Although the production itself was stunning, the text presented a numbers of difficulties as an adaptation.  It lacked a tight dramatic structure making it seem overly long.  Instead of a lot of dialogue, which usually makes Book-It’s adaptations work well, there was a huge amount of first person narrative, which in Act I dragged a bit.  However,   the acting, direction and technical aspect were so incredibly outstanding that the difficulties with the text did not stand in the way of enjoying the performance.

The team of David Quicksall as director, Andrea Bryn Bush as Scenic Designer, Andrew D. Smith as Lighting Designer and Nathan Wade as Sound Designer/Composer could not have done a better job in creating visual effects that brought the text to life using creativity and imagination rather than Hollywood hardware.

Connor Toms as Victor Frankenstein, handled an extremely demanding role expertly and managed to convey both the driven ambition as well as the confusion of a young person trying to find his path in life.   Frank Lawler as Walton, his rescuer, who recounts the story while Frankenstein is on his death bed, delivered a compelling performance, got the accent right and had an excellent speaking voice.  Frankenstein’s “Creature”, played by Jim Hamerlink, emphasized the vulnerability and pain underneath the anger and rage while handling the dialect well.

However, his very long dark hair, along with his height and costume suggested a Native American or Rasputin.   His make-up made him look not like a synthetic man, put together by different body parts, but like someone who had had an accident.  Costumes by Jocelyne Fowler were rather better for the men, but the women’s costumes did not look like they belonged to wealthy people.

The two sailors on the boat, in Russia wearing Russian hats spoke with unconvincing Cockney accents, which were at times incomprehensible.   They may have been written in Cockney, but there was no need to have them speak it unless they could be understood.

I must confess that I only knew the Frankenstein legend from the movies, and have never read the novel, so it was truly an educational experience for me to actually learn the real story.  Book-It is to be commended for staging the authentic text, and for solving the various technical problems so creatively.