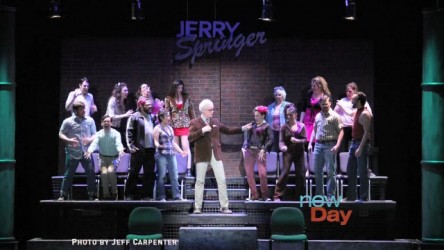 Jerry Springer: the Opera is a real opera, you guys! With opera singers and everything. And it’s great. Here’s what seems to have been done: someone (Stewart Lee and Richard Thomas) watched a helluva lot of “Springer,” extracted the peculiar poetry of the oft-ridiculed American working class, put it to a catchy and haunting score by Richard Thomas, hired some brilliant vocalists, and just told them to, you know, just get really gross with it.

Here’s the premise: Jerry is in the middle of filming a typical episode of his show, when he gets shot by a jilted employee, ends up in hell, where Satan asks him to host a special episode whose goal is to resolve the conflict between heaven and hell once and for all. Stupid? Maybe; I don’t even know anymore. I loved every second of it.

With refrains like, “It ain’t easy bein’ me, it so ain’t easy bein’ me,” “talk to the hand, ’cause the face ain’t listenin’” “mama smack me on the a***ole,” and “three nipple cousin f***er,” this show sometimes gives the impression of doing that old “gross for the sake of gross” thing that is so fatiguing. But in the context of an engaging, well-designed libretto and skillful recitative throughout, Springer lends a dignity to the characters and “trailer trash” tropes that brings the audience to see as fully human even those whom our culture despises and seeks to humiliate.

Here’s the thing, though. It’s offensive. How offensive? Poop smearing. Pants-pooping. Lots of poop. Gays, Christians, lesbians, the poor, the middle class, the rich. White people, white people, white people. No one, it seems, is safe. But: being broadly offensive doesn’t give total license to disenfranchise. This show set off my social justice alarm a few too many times. There were a few too many “chick with a dick” jokes about trans* individuals for my comfort. Sometimes we’re obliged not to make cheap jokes about oppressed groups’ realities. Sometimes, we need to avoid presenting oppressed groups as deviant when really they’re just folks living their lives. Also, with just one performer of color out of a couple dozen, this cast was weirdly uniform in its whiteness.

But, oh! The singing! THE SINGING. The ensemble? Fantastic. Sometimes a weak chorus can turn an otherwise great show into a clumsy monster, but this versatile group was tight, animated, and radiant. They play audience members, they play angels and demons, they play ghosts. The soloists? You guys, I died. Brian Lange, Lindsey Larson, Kevin Douglass, Megan Chenovick, Jennifer Bromagen, and Rachel DeShon, all hitting killer notes with exquisite finesse. Brandon Felker annoyed me as Jerry, to be honest, and the (mostly non-singing) role seemed to consist mainly of throwaway one-liners. But Sean Nelson as a fatigued and grimacing Satan gave one of the most engaging performances I’ve seen in a while. Loved the Mugatu hairstyle, Mr. Nelson.

I loved this show. I can’t really explain why, except to say that I love good singing, and I love uncomfortable tension. In Jerry Springer: the Opera the tension between the form and the content is pure poetry. Go see it, probably.