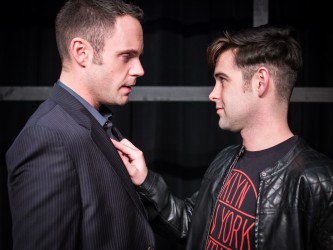 Intimacy is paramount in The Little Dog Laughed, a 2006 comedy from creator of To Wong Foo, Thanks for Everything! Julie Newmar, Douglas Carter Beane.  Director Annie Lareau brings this play back to life, as themes of celebrity and homosexuality still pervade popular culture and politics, and identifying as gay could still cost a career.  Beane does not disappoint as clever one liners amuse the audience while complex relationships and personalities are splayed open as the actors break the 4th wall so completely, at times it feels a 5th wall must be constructed, though the level of intimacy with the audience would certainly fell that wall as well.  It is a direct discourse which verges at times on intercourse.

The earnest narration from Diane (Heather Hawkins) leads us into a self conscious story about coming out or staying in, and the consequences of either.  Hawkins high energy performance commands attention, and her booming voice echoes through the ArtsWest playhouse and its thrust.  She can be trusted with this story, as she reveals all, and speaks explicitly about private issues such as sexuality, and secrets.  Her client, movie star Mitchell (Alex Garnett) protects the intimate details of his own sexuality while trying to live a successful public life.  Garnett casually hands in a brilliant performance, as his sheer ability as an actor shows in the subtle approach to his blatant problem.  Grounded in his character Garnett exudes a genuine humanness impenetrable to doubt.  The level of honesty in the role runs deep, even as he disrobes and the privacy of Mitchell’s life becomes apparent.

Together with Jeff Orton as Alex, the hustler turned sympathetic lover, the two forage a level of realism that turns the audience into voyeurs of two men unsure of themselves in an increasingly accepting world.  Orton’s James Dean quality makes him a compelling love interest, as the humanness of the subject matter trumps its taboos, and soliloquy disguised as narration puts the audience into the minds of the characters, as if witnessing a stream of consciousness, or a dream.

It would be remiss not to mention the fourth actor in this production, as her heterosexuality is the undercurrent to it all.  Ellen (EmilyRose Frasca) brings both tragic and comic elements to the story, as she lays out her soul with her streetwise ups and downs.  Expressive and believable, Frasca guides the roller coaster of the inner lives of these modern archetypes.

The scenery (Jenny Littlefield) and sound (Peter Fleming) work together to enhance the realism and intimacy of the acting.  At center stage is the symbolic hotel bed, dominating the stage.  While many scenes take place in this room, many do not, but minor adjustments to the furniture, lighting (Tristian Roberson) and music allow for multiple locations to exist alongside the ever present bed.  Like the invitation to the conscious minds of the characters, the bed reminds us of the sub-conscious compulsion to remain there.

In an ever evolving world of tolerance and change, this evocative tale of self acceptance in the spotlight should not be missed.  Honest acting from the heart and soul is to be cherished, and ArtsWest delivers it with class.