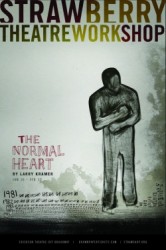 Larry Kramer’s The Normal Heart is a play set in New York City in the early to mid 1980’s, through the course of the AIDS epidemic. It follows a handful of gay men active in the city’s response to the crisis. There are deaths.

It is difficult to write about a play like The Normal Heart. When you’re a gay man born shortly after the virus was discovered, stories like this one carry a tremendous cultural weight. There is gratitude, there is guilt, and fear, and there is the insistent knowledge that, but for a decade or so, it could have been me watching my friends fall prey not only to a mysterious illness, but to the consequent accompanying fear of their own identity. I was turned inside out by this play. Was it because it was exceptionally well-composed and performed? Or simply because the shadow of the burden of my cultural forbearers has such a shattering force?

The play is the semi-autobiographical story of Kramer’s experiences in fighting for funding for and recognition of the AIDS crisis. Ned Weeks (Greg Lyle-Newton) is Kramer’s doppelganger, a Jewish-American gay activist, furious at the inactivity of his closeted peers. Ned’s lover, Felix (Andrew Russell) is a covertly gay journalist. The political story is one which traverses the historical boundary between the fresh-air of the sexual revolution and a new, terrifying death-by-gayness. Amy Thone, playing Emma, a Doctor based on Dr. Linda Laubenstein, a champion for AIDS research, superbly illustrates the toxic politicism that delayed development of diagnostics and treatment. Assimilation clashes with political queerness, promiscuity conflicts with prudence, fear and lust revolve around each other like territorial dogs. This is not simply a chronicling of a plague, nor is it a tragic love story. The script is elegant in its depiction of real people and of the uncomfortable truth that the world does not always deliver love or fear, but often both.

At times, the script scorches like a branding iron.

Sheila Daniels’ direction is smooth as silk at times, and relentless at others. The theater is set up such that the audience can sit on either of two opposite sides of the stage, so the actors are more free to interact with the space naturally. These are intimate rooms where you feel like you’re eavesdropping. Transitions are smooth and unnoticeable, in part because between each scene, an actor steps in from the wings and reads the names of people brought down by AIDS during the time of the scene. This is an artful cruelty which grows in severity as the play progresses. A strangely chilling piece of this play is the state of the stage as the second act progresses. In various scenes, papers are thrown in fury, groceries are dropped and flung, milk spills everywhere, and no one cleans these up. As the play draws to a close, there is the haunt of a mess, of responsibility and culpability, and it stares at you from the floor. This play fights dirty.

These actors are not messing around. These characters have voices that delicately betray their individual histories. There are no stereotypes here, there are only voices. Stephen Black, who plays Mickey, an employee of the Centers for Disease Control, performs a beautiful and wrenching personal narrative. Peter Crook soars as Bruce, the closeted CitiBank executive whose lover dies in hospital and is put in a Glad bag and left outside with the trash.

I can describe the value of this play till my fingers fall off. Does it stick to my marrow because I happen to be a post-epidemic homo? Or because it’s team crafted it with skill and passion? I can’t say. But either way this is a story that merits remembering, and merits being told by people who were there. It’s a play whose various messages I don’t entirely agree with, but which I respect. It’s exhausting and draining. After the houselights came up, and we were filing out the door, I said to a young man behind me, “That was a lot to see, wasn’t it?”

The Normal Heart, written by Larry Kramer, directed by Sheila Daniels, presented by Strawberry Theatre Workshop opened on Jan. 16, and runs till Feb. 15 at the Erickson Theatre off Broadway (1524 Harvard Ave, Seattle, WA 98122).