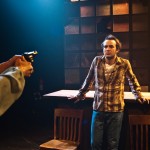 The sound design by Nathan Wade and the musicians, Owen Ross and Annie Jantzer,  in Book-It’s new Circumbendibus series show JESUS’ SON were excellent.  Adding live music with many different instruments and a vocalist was perhaps the only pleasant thing about this production.

Since the early days in the Odd-Fellows building, Book-It Repertory Theatre has always been my favorite theatre in town because it produces plays where the dominant element is “language” rather than “shock”.  Although I assume I was supposed to react with shock to JESUS’ SON, given the material, the only reaction I had was intense boredom.   The problem was not the acting, which was excellent, but because they chose an unsuitable text to adopt for the stage.

Unlike most Book-It theatre production, which are staged adaptations of longish novels with coherent story lines, dramatic arcs, character development and beautiful language, JESUS’ SON was a group of short stories, most of which made the same point again and again.  The script struck me as pretentious attempts at poetic language, making me cringe with embarrassment.

Ninety percent of the adapted stories recounted the self-destruction of a low-lifer named F**khead.    Predictably, his self-destruction involved heroin, pills, booze, violence of the domestic and barroom type, abortion, knives, guns and anger.  Due to an accident, F**khead ends up in a hospital where he reforms overnight, without going through any of the psychic or physical agony addicts do.  After he recovers, the director threw in a non-sequitur of a scene with  F**head, having coitus with a handicapped woman.

This fall, for some reason, plays about self-destruction involving substance abuse and violence have been very popular. Three times,  I’ve more or less seen the same show.  Subjecting the audience to 90 or 120 minutes of repetitive re-enactment of self-destruction, was something all these plays had in common.     All of them have missed the point that addicted people are psychically dead so there IS no character development.  In order to move the audience, it is better to show an addict going through the internal and external struggles of recovery.  Violence should be kept to a minimum and should never be in a small space with the audience 12 inches away from the brawling actors.