Who’s in Charge Here. The Way of All Fish and I can’t Remember Anything 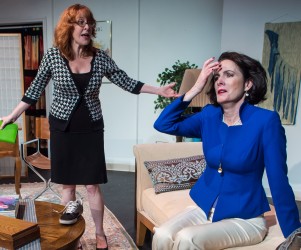 Windfall productions produced two one-act plays by two of the “Greats” of the post World War II generation:  Elaine May and Arthur Miller.  Although Arthur Miller is more famous, as an American writer of international statute, Elaine May is perhaps more endearing to baby-boomers.

Brilliantly written, these two one-acts dealt with human conflict and intimacy while entertaining the audience.

Every Chauffeur I’ve ever Sleep with.

The first, “The Way of All Fish” by Elaine May, takes place in 1993 in what appears to be the home office of a super wealthy female tycoon, Mrs. Asquith, on Madison Avenue in New York.    Probably tying with Anna Wintour (aka Miranda Priestly-The Devil Wears Prada) as the boss from hell, Mrs. Asquith, played superbly by Eleanor Moseley, engages in a power tango with Miss Riverton, her blundering secretary.  Miss Riverton, played by Christine Mosere, seems to be a naïve girl from the Midwest, who initially appears to be completely intimidated by her boss.    But as the evening progresses we learn that appearances can be deceiving.

Due to scheduling mismanagement, the divorced Mrs. Asquith does not have plans for dinner on a Friday night.  It is too late to get a reservation in a “suitable” restaurant, which is a monumentally unsolvable problem for her.  As a result, Mrs Asquith, out of sheer terror at being alone, invites her secretary to have a boozy TMI dinner at home with her.

During the course of the evening, we discover that the power dynamics turn with great intensity and humor, only to be re-established later on.   Delightfully, the dialogue was filled with ironic commentary on the narcissism of the very rich, as well as female competitiveness and vulnerability.   The two actresses were more than able to bring out the best in this excellent script.

Never trust a Mortician who has a Nixon Bumper Sticker.

“I Can’t Remember Anything”, the second piece, was more sober, but still very funny.   Two very old friends, both retired, have been neighbors for years and years.  Leo, played by Davis S. Klein was the best friend of Leonora’s husband, Frederick.

With most of their friends dead, and their families scattered, the two keep an eye on each other and are so familiar that they could pass for husband and wife, or more likely, brother and sister.   A rich widow from New England,  Leonora, has not adjusted to being single, has profound memory loss, can’t find a purpose in life anymore, and drinks to compensate.

Leo, an old 30’s style leftie Communist, who sometimes wonders if the world really is  better as a result of his activism, still reads the paper to keep up with things, and is facing death more pro-actively.  He wants his remains donated to the Yale Medical School for research and doesn’t trust the local mortician because the “mortician used to have a Nixon bumper sticker.”

At times the play seemed a bit unfocused but the performance of David S. Klein stole the show.  Ruth McKee, as Leonora, adopted some sort of accent, which was all over the place, at times Irish, at times an attempt at BBC English and so inconsistent that it got in the way of her acting.

Nevertheless it is an endearing play about two old people who have had different life-styles and political views, a lot of shared history, and have managed to establish a life-sustaining emotional connection.

Fortunately, the venue where the show took place, The Little Theatre ( Washington Ensemble Theatre’s home) has been spruced up lately. Although a small space, it was perfect for two-person plays.  The sets were simple yet effective. The sound design by John Epperson added a lot to the enjoyment of the evening and the directing, by Paul O’Connell, was spot-on.

Hopefully Windfall Productions will produce more plays like this.  Incidentally, there are two great restaurants, the Monsoon, and the Kingfish Café close to the theatre.

A View from the Bridge: A Contemporary Classic
September 1, 2015
© 2021 Drama in the Hood. All rights reserved.
Site Design