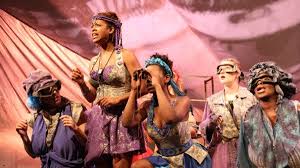 A group of US soldiers are present and accounted for; they’re wandering around the Intiman Festival stage as the audience enters.  Some are horse playing, some seem to be setting up for some kind of a production, others simply laze about…just doing the hours of their assigned tour of duty in a setting suggesting the deserts of Afghanistan.   Soon a sergeant (an enthusiastic Tim Gouran) establishes the ground rules:  we are to have a “Soldier Show” tonight, but instead of lip-synching and stand up routines, the crew has decided to put on Aristophanes’ Lysistrata.

Director Sheila Daniels relished the chance to replicate a scenario echoing Greece living with 21 years of the Peloponnesian War.  She shifts her action to a group of Americans who too must deal with the physical state of a seemingly endless war 24/7, and who desperately need the release of laughter.  With just a short bit of exposition, the high-energy cast is off and running, presenting their U.S. Army strong take on a Greek classic.

A wonderful concept to be sure, alas not everything works to perfection on the Intiman stage.

A very strong Shontina Vernon as Lysistrata grounds the play.  She opens the show belting out Pink’s “Stupid Girls” and quickly convinces her women to buy into the tactic of withholding sex from their men until they put down their weapons and cease fighting. Lots of fun here seeing the format of the ancient Greek comedy and its readiness for song fit so snuggly into this modern setting.  Amy O’Neal has provided lively, original choreography that has the soldiers filling the stage with some really fine modern dance moves.  I wish there were more songs in the show.

Instead there were lots and lots of phalluses; pink, blue and green phalluses– big, bigger and gigantic phalluses in all shapes.  The jokes about the horribly frustrated men worked for a while, but wore out their effectiveness far too soon.  And sadly, the recent headlines of U.S. women military enduring sexual harassment from their fellow soldiers add a darker shade to all of the sexual hi-jinx on the stage.

The play works best when it settles down and addresses the tragic consequences of endless military conflict.  In a striking moment, Lysistrata faces down her soldiers averring, “We paid in sons.”  Suddenly the crazy anti-war shenanigans take on a much deeper texture.  I found the startling closing of the one act quite effective. Though even that scene might have been more moving if less stylized.  Daniels has a dynamite concept here; the show just needs a solid refocusing.

Lysistrata runs through September 12 at the Intiman Theatre Festival.