Poisoning Pigeons in the Park 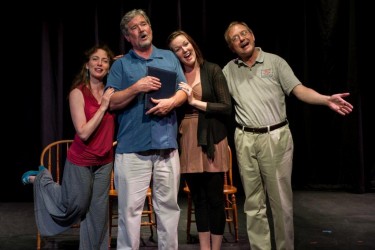 Hit and Run Theatre opened Poisoning Pigeons in the Park, a Musical Review of Tom Lehrer’s songs, directed by Arne Zaslove with Musical Direction by John Engerman at West of Lenin Theatre in Fremont, on Thursday night.

A mathematician by training, Tom Lehrer was a songwriter who specialized in extremely risque social and political satire, from the late 40’s to the early‘60’s, when the definition of risqué was completely different from what it is now.  In those days,  obscenity laws were in force and show biz was trying so hard to APPEAR wholesome that the word pregnant could not be mentioned when the married Lucille Ball was “enceinte”  His songs were anything but wholesome and discussed taboo subjects, which nowadays, thanks to the Great Cultural Revolution of the late 1960’s and Oprah are positively mundane.

Originally he performed his songs around Cambidge MA, while studying at Harvard.  Being an underground figure, he resorted to self-producing and self-marketing.   However, his big breakthrough came not in the U.S. but in the U.K., when Princess Margaret (deceased sister of Queen Elizabeth II) was quoted saying that her musical tastes were “catholic, ranging from Mozart to Tom Lehrer”.  Although no radio station in the U.S would play his songs, the BBC was not so squeamish and he enjoyed great popularity there.

His songs deal with many of the social and political topics of post-war America:  the Cold War, the Arms Race, Racial and Ethnic strife, drugs, sexual perversion, and venereal diseases (50’s nomenclature for STD’s) which we now speak about openly but were absolutely taboo in those days.  Since he had to get his messages across using an indirect code, the lyrics are clever, witty and sophisticated with racy, upbeat tunes.   And totally hilarious.

The cast and particularly the direction were worthy of the material.  Randy Hoffmeyer, Janet Rayor, Brittany Menzies, Mike King and John Engerman were all superb performers, great singers with physicality to match.   Particularly impressive was the direction by Arne Zaslove, who added creative touches to the material using simple props and costuming to enhance the songs.  In recent years, Tom Lehrer has been neglected, so it was wonderful to revive his songs, which are still highly relevant.

In the 90’s we all thought the Cold War between the Soviet Union (now called Russia) and the U.S. was a thing of the past, but it seems to be rearing its ugly head again.  Nuclear proliferation is still topical.  Even uglier than in the 50’s and 60’s, ethnic and racial discord have made encore appearances.

Mathematicians usually love Tom Lehrer, not just because he belongs to their fraternity but because he has that peculiar sense of black humor they all share.  My companion for the evening was the same mathematician who introduced me to Tom Lehrer more than 40 years ago, and he said he still remembered all the songs by heart.

Seeing this show is a unique opportunity for the baby boomers to see one of their treasures and for the younger generation to see someone from another generation who still speaks the truth.  West of Lenin is small, so it would be wise to get your tickets asap.